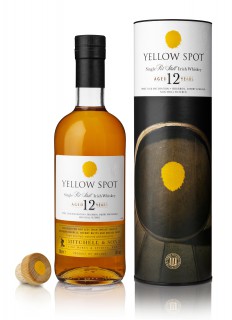 Yellow Spot is matured in a combination of American bourbon, Spanish sherry and Spanish Malaga casks. It is the rare taste of a bonder’s style Pot Still Irish Whiskey and is known for its sophisticated and complex taste profile, possessing honey sweetness with pot still spices. Hints of fresh coffee, creamy milk chocolate and crème brulee are also found in each taste of Yellow Spot.

Each batch of Yellow Spot is made from a mash of malted and unmalted barley, which is then triple distilled in traditional copper stills. Yellow Spot was created and sold by Mitchell & Son Wine and Spirit Merchants in Dublin. The Mitchell family was in the whiskey bonding business and sent empty wine, sherry and port casks to the local Jameson distillery, which were filled and returned to the Mitchell’s cellar warehouse.

Yellow Spot will be released in the U.S., beginning this month and sold at a suggested retail price of $99.99.

Pernod Ricard USA is the premium spirits and wine company in the U.S., and the largest subsidiary of Paris, France-based Pernod Ricard SA, which employs a workforce of nearly 19,000 people worldwide and is listed on the NYSE Euronext exchange (Ticker: RI).

Pernod Ricard USA is based in New York, New York, and has roughly 850 employees across the country. Pernod Ricard USA urges all adults to consume its products responsibly and has an active campaign to promote responsible drinking. For more information on this, please visit: www.acceptresponsibility.org