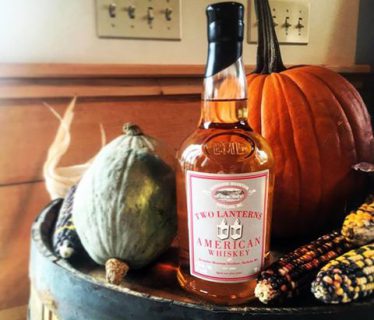 BMD crafted this one-of-a-kind premium whiskey by triple distilling Samuel Adams flagship Boston Lager at BMD’s distillery in Great Barrington, MA, followed by years of barrel aging in vintage bourbon barrels. While BMD is well known for aging spirits in used craft beer barrels, Two Lanterns is the first whiskey distilled with Samuel Adams’ Boston Lager. It took nearly 25,000 gallons of Boston Lager to produce the 1000 gallons of Two Lanterns available for purchase, so this whiskey is a truly unique and rare find.

“After anxiously waiting for more than four years, we are excited to finally share the fruits of our teamwork for craft whiskey and beer lovers to enjoy,” said Berkshire Mountain Distillers founder Chris Weld. “Two Lanterns American Whiskey is truly a labor of love and we had a lot of fun working with Jim and the Sam Adams team.”

The whiskey’s name was inspired by the two lanterns lit at Old North Church in Boston in 1775 that signaled to the Sons of Liberty that the British were coming by sea to Lexington and Concord to capture Samuel Adams and John Hancock and hang them as traitors. The alert launched the American Revolution, much like the creators of Two Lanterns have revolutionized the craft beer and whiskey industries. Jim Koch brewed the first batch of Samuel Adams Boston Lager in his kitchen in 1984 using his grandfather’s recipe, creating a full-flavored beer that propelled the craft beer movement. BMD’s innovation in craft spirits began in 2007 and its work in craft beer barrel-aged whiskey – and now distilled beer – has built a bridge between two highly sought-after craft beverages: whiskey and beer.

“After barrel aging for over four years, we can’t wait for drinkers to finally have the chance to enjoy Chris’ Two Lanterns whiskey distilled with Boston Lager,” said Jim Koch, Samuel Adams founder and brewer. “Chris is doing a lot of really cool things and it was fun and interesting for us to see how the ingredients and flavor in the beer influenced the final whiskey.”

The distilled Samuel Adams Boston Lager has distinct notes of malt and piney hop flavors. The lager was aged for four years in vintage bourbon barrels, creating a smooth whiskey with sweet fruity esters and a very slight bitterness from the Noble hops. Once fully emptied, the American oak barrels used for aging the whiskey will make the trip back to the Samuel Adams Boston Brewery, where they will be used for a yet-to-be-named barrel-aged beer.

Throughout the months of November and December, Chris Weld and BMD will hold over 40 tasting events for Two Lanterns American Whiskey. For more information on the locations, visit berkshiremountaindistillers.com.

ABOUT BERKSHIRE MOUNTAIN DISTILLERS, INC.: Established in 2007, Berkshire Mountain Distillers (BMD) has created a line of award-winning artisanal spirits including Greylock Gin, Ethereal Gins, Ragged Mountain Rum, Ice Glen Vodka, Berkshire Bourbon and New England Corn Whiskey, currently available in 19 different states. All products are handcrafted in small batches in Great Barrington, Massachusetts at the Berkshire’s first legal distillery since prohibition. BMD is one of the founding members of the craft distiller movement and is embraced by several of the nation’s leading mixologists. Our products have received numerous high accolades including Gold Medal Awards from the Beverage Tasting Institute and San Francisco Spirits Competition and national praise from publications like GQ, Details, New York Times, Wine Enthusiast and Jim Murray’s Whiskey Bible. As supporters of local agriculture and business, BMD uses regional materials in many of our products, creating a truly authentic artisanal brand. For more information and to find where BMD is available, visit www.berkshiremountaindistillers.com, friend us at www.facebook.com/berkshiremountaindistillers or follow us on Twitter @BerkshireMtDist.

ABOUT THE BOSTON BEER COMPANY:

The Boston Beer Company began in 1984 with a generations-old family recipe that Founder and Brewer Jim Koch uncovered in his father’s attic. Inspired and unafraid to challenge conventional thinking about beer, Jim brought the recipe to life in his kitchen. Pleased with the results of his work, Jim decided to sample his beer with bars in Boston in the hopes that drinkers would appreciate the complex, full-flavored beer he brewed fresh in America. That beer was aptly named Samuel Adams Boston Lager, in recognition of one of our nation’s great founding fathers, a man of independent mind and spirit. Little did Jim know at the time, Samuel Adams Boston Lager would soon become a catalyst of the American craft beer revolution.

Today, The Boston Beer Company brews more than 60 styles of beer. It relentlessly pursues the development of new styles and the perfection of classic beers by searching the world for the finest ingredients. Using the traditional four vessel brewing process, the Company often takes extra steps like dry-hopping, barrel-aging and a secondary fermentation known as krausening. The Company has also pioneered another revolution, the ‘extreme beer’ movement, where it seeks to challenge drinker’s perceptions of what beer can be. The Boston Beer Company has been committed to elevating the image of American craft beer by entering festivals and competitions around the globe, and is one of world’s most awarded breweries at international beer competitions. As an independent company, brewing quality beer remains its primary focus. Although Samuel Adams beer is America’s leading craft beer, it accounts for only one percent of the U.S. beer market. The Boston Beer Company will continue its independently-minded quest to brew great beer and to advocate for the growth of craft beer across America. For more information, please visit www.samueladams.com.