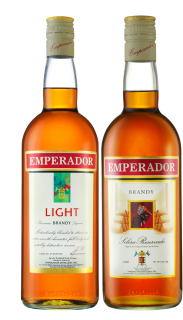 Irvine, CA – 12/1//2016 – EDI – Emperador Distillers, Inc. based in The Philippines has recently appointed Irvine California based, G.K. Skaggs to import and market Emperador Brandy throughout the U.S.  G.K. Skaggs will be the exclusive importer of Emperador. This world renown Brandy will be launched during 1st quarter 2017 in major U.S. markets.

“During 2011 to 2012 Emperador Distillers more than doubled their volume sales with growth of 109.4%. In 2014 Emperador Distillers, Inc. sold 33 million 9-litre cases increasing sales by 10% and strengthening its hold on the market.Emperador Distillers Inc. (EDI) controls around 97% of the brandy market in the Philippines and approximately half the entire spirits volume in the Pacific-Ocean island nations.” (Drinks International Millionaire’s Club 2012)

“All it takes is one look, one sip to fully appreciate Emperador Brandy as a world-class product – that just happens to be conveniently affordable.” (Emperador Distillers, Inc.) Both bottles are packaged in 750ml bottles with clean and polished labels; the Emperador Light with an ABV of 27.5% and Emperador Brandy with and ABV of 40%, both display distinct amber color. In the nose, a pleasant bouquet of a fruity aroma of grapes is noted, easy and balanced in the mouth, its body hints of refreshing peach, with a subtle finish of wood and almond. Emperador Brandy owes its success to an intricate blending and aging process.

In 2010, Emperador Light was introduced in the Philippines market, soon becoming the country’s first light full-flavored brandy. Factoring in the brand’s monumental success are its exceptional quality, widespread market availability, and charming campaign focused on “Keeping Things Light”.  The following year, the brand launched its “Gawin Mong Light” campaign, which encouraged drinkers to look at the lighter side of life’s daily challenges. This philosophy resonated well with their target consumers, who constantly work hard to achieve their personal goals, but prefer to keep things light when it comes to their social life. For more information on Emperador Brandy please visit: http://www.emperadorbrandy.com/

Emperador Distilleries is one of three companies within the Alliance Global Group, headed by Dr. Andrew Tan, a Chinese Filipino billionaire whose business interests embrace not only drinks but also real estate and fast food. Emperador is now the world’s best-selling brandy, retailing 400 million bottles in Asia during 2013. The company owns the renowned Bodega San Bruno in Jerez, Spain and vineyards in Toledo. With the acquisition of the Bodega came a significant quantity of brandy that is maturing in ex-Sherry casks.