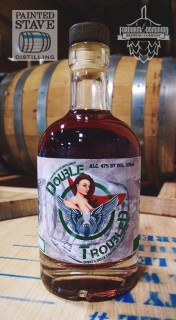 In the spring of 2015, Painted Stave Distilling partnered with Fordham & Dominion Brewing Co. to create an exclusive and unique whiskey. 250 gallons of Dominion’s Double D Imperial IPA had been distilled into 20 gallons of malty, hoppy Painted Stave whiskey, and then aged in two 10 gallon whiskey barrels for 10 months. The first release of 200 bottles will be made available to the public to sample and purchase on Saturday April 23rd at Fordham & Dominion’s 5th Annual R2Hop2 Beer and Music Festival in Dover as well as at Painted Stave Distilling in Smyrna.

In addition to the release of the whiskey, attendees at R2Hop2 will also be able to sample Double D Imperial IPA that has been finished in the first Double TroubleD whiskey barrels. Whiskey and Beer, what could be better!

This unique partnership between Painted Stave Distilling and Fordham & Dominion Brewing Co. is just another great way that the craft beverage producers in Kent County are working together to create new and innovative beverages here in the First State.

Double TroubleD is 47% ABV and sold in 375ml bottles with a suggested retail price of $35.