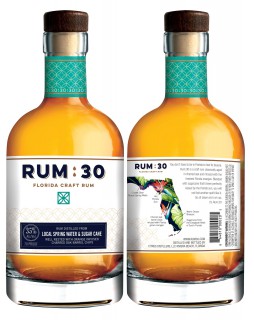 FORT LAUDERDALE, Fla., March 21, 2016 /PRNewswire/ — While many people associate rum with a laid back vacation on a Caribbean island, a new Florida craft rum is set to breakout in the craft spirits scene this April.

Rum:30 is the creation of Fred Greene and Cameron Grace, two Fort Lauderdale locals and marketing executives. The development of Rum:30 comes as a response to rum’s increasing popularity, along with a desire to make a craft rum that captures the spirit of Florida.

“It’s long been said that rum has been overdue for its time in the spotlight, and what we wanted to do was to create a Craft Rum that captured the spirit of Florida in a bottle,” said Fred Greene. “We wanted a spirit that was sophisticated yet relaxed – Rum:30 is great for sipping neat or on the rocks, or enjoyed in one of our unique concoctions. We’re extremely excited to be debuting Rum:30 at the 2016 Wine & Spirits Wholesalers of America convention in Las Vegas this April.”

Classically aged in in white American oak and uniquely infused with a hint of freshly cut orange peels, Rum:30 offers a subtle orange aroma and a complexity of flavors that gives it a relaxed Floridian vibe. Along with local Florida sugar cane and spring water, Rum:30 is all the flavors one craves bottled up in a mid-century modern lifestyle package that mirrors the sophisticated and unique nature of the craft spirits market.

With a unique twist, Rum:30 will also launch two new cocktail recipes one of which is a take on an old classic: the Mojito which it’s calling the Miami Mojito along with a dessert drink (or shot), the Milano, which captures the flavors of the irresistible cookie. Both recipes are being entered as part of the Mixology competition at the2016 Wine & Spirits Wholesalers of America convention in Las Vegas.

With rum beginning an upward trend as consumers try the spirit over others, quality craft rums such as Rum:30 are filling a void in a market that is growing rapidly—and the uniqueness of an all-Florida craft rum made with the finest of ingredients is already proving a pull for lovers of the drink and its many subtleties based on local market testing that began in early March 2016.