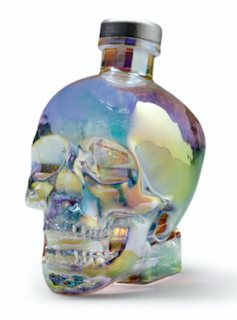 Distilled in Newfoundland, Canada, Crystal Head AURORA comes in a beautifully crafted bottle, which is an accurate rendering of the human skull. With an iridescent finish, the bottle was designed in celebration of the most vivid aerial phenomenon in the world – ‘the Northern Lights.’ To create the aesthetic of the lights’ mysterious visual properties, the skull shaped bottle is first placed into a sealed chamber and electrically charged. Two metals in powder form are activated seven times and released in the pressurized chamber. The powder is drawn to the electrically charged bottle – completely coating it. Then heated at high temperature, the powder melts, creating a uniquely iridescent metallized finish in which no two bottles are alike.

AURORA is additive-free and made with high quality English wheat grown in the hills of North Yorkshire, and with pristine water from St. John’s, Newfoundland. It is five times distilled in a traditional column still prior to filtration. The vodka is filtered a total of seven times, the first three filtrations using activated charcoal – lasting six hours to remove impurities, next it is filtered three times over 10,000 Herkimer diamonds before finally going through a micro filtration prior to being bottled. Because AURORA was crafted with English Wheat, its flavor offers a drier, bolder, and spicier vodka than the Crystal Head original, made from peaches and cream corn. On the nose, AURORA is crisp with delicate floral aromas and a subtle hint of anise. The taste profile is warm with strong peppercorn notes and a touch of sweetness. The vodka is dry and clean, with a warming sensation to finish.

“The new expression of Crystal Head is bottled in hand-crafted glass with an original, decorative finish. No two bottles are alike and the appearance is designed to reflect the aurora borealis natural light display, with its mysterious visual properties,” said Dan Aykroyd, Crystal Head Founder, actor, musician and entrepreneur.

Crystal Head Vodka is a globally recognized spirit and has won awards including:

Crystal Head Aurora Vodka is available in 750 mL with a SRP of $59.99. For more information about Crystal Head Vodka, visit www.crystalheadvodka.com and join the conversation on Facebook and Twitter.

Produced in Newfoundland, Canada, Crystal Head launched in the U.S. in 2008 and is now sold in over 70 countries around the world. The multi-award winning, ultra-premium vodka was created by Dan Aykroyd and renowned artist John Alexander in a vessel crafted as the symbol of life, reflecting power and enlightenment.

Crystal Head Vodka produces two expressions of vodka: the original, produced from peaches and cream corn and AURORA, which is wheat based. Crystal Head vodkas contain no additives, glycerol citrus oils or sugars. Nothing is added to enhance or mask the taste.

Supercharge Innovation is Next Week!