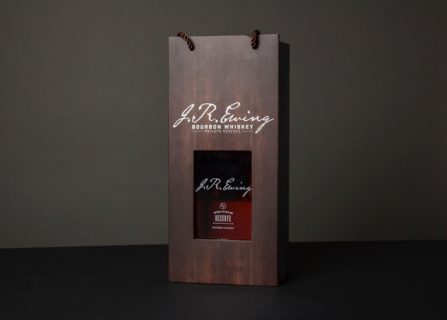 No need for gift wrap, the new packaging features a handle to simplify giving, and to showcase in a collection. Available at major retailers of wine and spirits in cities across the USA including Dallas, Houston, New York/New Jersey, Los Angeles, San Francisco, Chicago, Miami, and Atlanta in November and December, J.R. Ewing Bourbon’s holiday packaging adds Texas warmth to holiday festivities and is available for as low as $30. J.R. Ewing Bourbon is ideal for adding character to your holiday gifting.

“The convenience of the gift pack makes it simple to add some swagger to your gift choice.” said Andy Harmon, Co-Founder of SouthFork Bottling Co. “True to its legacy, J.R. Ewing Bourbon and the branding of the Holiday Pack make a bold statement for any holiday get-together.”

The holiday packaging celebrates multiple accolades the brand has collected in 2017. The Tasting Panel, the industry’s pre-eminent spirits rating publication, gave J.R. Ewing Bourbon a 95 rating, among the highest ratings awarded in the whiskey category. Further, J.R. Ewing Bourbon was named the coveted 2017 Whiskies of the World Awards Silver Medal recipient, which is one of the largest and most popular consumer whiskey tasting events in the US.

J.R. Ewing Bourbon is a partnership between Warner Bros. Consumer Products and Warner Bros. Television Group, in collaboration with Southfork Bottling Company. Distilled in J.R. Ewing’s home state of Texas, 80-proof light amber-colored bourbon is currently distributed in 30 states, and will continue to expand toward full national distribution. Plans for international distribution are underway as well. The brand is marketed to distributors around the United States by Southwest Spirits and Wine, a national wine and spirits marketing company, and internationally by Melchers Group, a producer and exporter based in The Netherlands. For more information, please visit the website at www.jrewingbourbon.com.