(Oct. 2, 2017) — Doug McIvor, master distiller for the John Milroy Selection brand, will be on tour in the U.S. to revisit whisky enthusiasts in Los Angeles and make his debut in Seattle. 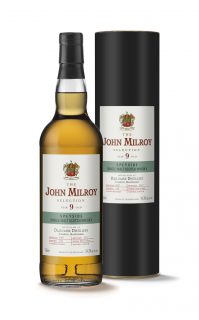 Founded in 1964, Milroy’s of Soho became known for selling the largest selection of whisky in London, accruing a customer base including the highest servants of the British government. Milroy’s championed Single Malt in the UK and with this, became an established whisky institution. One of the founding brothers, Jack Milroy, went on to bottle many whiskies under his own name; “John Milroy”. By the time Jack sold his “John Milroy Selection” brand to Berry Bros. & Rudd  in 2009, the name had become synonymous with quality far beyond the UK. In recognition of his contribution to the growth of Scotch Whisky, Jack was presented with a life-time achievement award and entered the Hall of Fame at the Icons of Whisky in 2010.

Doug McIvor, Spirits Buyer at Berry Bros. & Rudd and lifelong friend of Jack Milroy, learnt his business having worked for the Milroy’s in the 1990s. Many years and thousands of whiskies later, he now bears the responsibility and honour of continuing to select only the most exceptional single cask whiskies in the world to bottle under the John Milroy label. In 2017 Doug was awarded the whisky industry’s highest accolade  ‘Master of the Quaich’ for his outstanding contributions to the trade.

Doug McIvor comments ‘I look for balance and complexity, maturity and texture – for excellence. It doesn’t matter to me whether a cask differs from a distillery’s “house” style; non-conforming casks can sometimes be the greatest. Equally, age is not king: maturity counts for much more. While there is beauty in a cask that, over time, has breathed its youthful vigour to the angels, embracing the oak to find harmony and great balance; the oldest may not be the most complex, the most perfectly poised.’

Alongside Doug’s tour in the USA, Ronnie Cox, Brands Heritage Director at Berry Bros. & Rudd, will be visiting Washington D.C. to launch some exciting new expressions of the John Milroy Selection.  Ronnie adds ‘In Scotland there are over 70 independent bottlers of Scotch Whisky but there is good reason that Dougie won the top accolade. As a great friend of John Milroy this range is very personal to him. Dougie is probably the only person who still knows the exacting standards of the Great Chieftain and, having known both, I understand his emphatic goal to bottle only what Jack (and he) would enjoy.’

Spirit Imports, Inc. former owners of The Scotch Malt Whisky Society of America, headed by Industry Veteran Alan Shayne, a 2017 inducted Keeper of the Quaich, is the USA importer for The John Milroy Selection.

Milroy’s of Soho was founded by John ‘Jack’ Milroy in 1964 when he opened his wine shop at No. 3 Greek Street, in the heart of London’s swinging-sixties Soho district. This was the epicenter of the pleasure-seeking world of ‘modern’ music, fashion and of course the wines and spirits that fueled the era.

John’s brother Wallace, a gold miner in South Africa, provided the funds and John took advantage of the removal of price controls to sell wine and spirits at much better value than his competitors, making him the go-to man for high-quality, affordable beverages.

Milroy’s went on to sell not just wine, sherry and Champagne, but also whisky – as Scottish single malts entered the UK market in the 60s and 70s. This was the perfect trajectory for the brothers whose flair with whisky began in their early teens in the cellars of the family pub in Dumfries where they were able to extract liquid from bottles without damaging the seals.

Before long Milroy’s was best known for selling the largest selection of whisky in London, perhaps even the world. Such was their reputation the brothers were invited to tour Japan: Running whisky tastings for businessmen and women over the course of their trip. Still today people who attended those tastings on this seminal tour remember the visit, and the countless visits thereafter.

Berry Bros. & Rudd is one of Britain’s oldest wine and spirit merchants: in 1698 it opened its doors for the first time at 3 St. James’s Street, London, and today it continues to trade from the same premises. With two Royal Warrants, more than 300 years of history and six Masters of Wine, they have a world-class reputation for exceptional wines and spirits.

Despite Berry Bros. & Rudd’s history and the continuation in the belief in traditional standards of service and quality of care, storage and provenance, it is one of the most innovative and modern wine and spirits merchants with a commitment to constant progress and change.