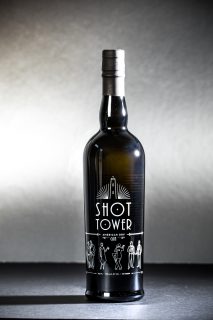 Shot Tower Gin was originally released shortly after Baltimore Whiskey Company opened in 2015, and has been their tentpole product prior to the release of their namesake Epoch Rye Whiskey in March of this year. The gin takes its name from the Phoenix Shot Tower, which during the 1920s was still one of the city’s tallest structures and was closely associated with the city. Baltimore Whiskey Company’s owners see it as a symbol of Baltimore’s free spirit, as the city was home to many bootleggers and speakeasies in the only state to officially not enforce Prohibition. Shot Tower Gin has won multiple gold medals at national and international tasting competitions, most recently at the 2018 New York International Spirits Competition.

“Shot Tower Gin was our first product, and we’ve since learned so much about branding, as well as who we are and what we want to present as a company,” said Max Lents, founder. “The new bottles speak better to the world class gin inside, and they also help us tell the story we’re trying to tell with Shot Tower Gin.”

Baltimore Whiskey Company celebrated the release of the new Shot Tower Gin at an event at the Mobtown Ballroom last week. Bottles are available now and will begin to appear on local store shelves soon. For more information, visit www.thebaltimorewhiskeycompany.com.