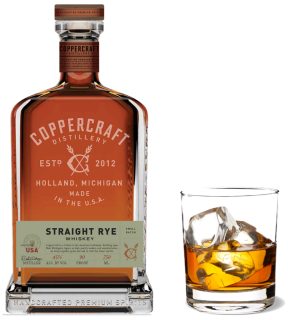 HOLLAND, Mich. — Coppercraft Distillery, the award-winning artisan spirits distiller based in Holland, Mich., announced today it is re-launching its rye whiskey into the market after a two-year hiatus. Coppercraft Rye will be available year-round at retailers, bars and restaurants throughout Michigan.

Comprised of 95 percent rye and five percent barley, Coppercraft’s Rye Whiskey is bottled at 90 proof. Beginning with hints of cocoa and malt followed by peppercorn spice, Coppercraft Rye finishes smooth, with a hint of sweetness, perfect for mixing a Manhattan, Sazarac or other cocktail.

“Our distilling team worked hard to build on the success of our previous award-winning Rye Whiskey, and created this new product by masterfully blending our rye whiskey, distilled in Holland, Mich., with hand-selected found rye,” said Brandon Joldersma, general manager of Coppercraft. “Our artisan blending techniques create the best tasting rye whiskey possible, and enable us to produce the volume that we need to serve the growing number of fans who have been asking for this product to return.”

Like bourbon and whiskey, rye continues to gain popularity and market share in the spirits industry. From 2009 to 2016, rye whiskey volumes increased by 778 percent, according to the Distilled Spirits Council. Since 2009, rye whiskey volumes jumped from 88,000 cases to nearly 775,00 cases in 2016, translating to a 900 percent jump in revenue from slightly more than $15 million in supplier revenues in 2009 to nearly $160 million in 2016.

Every bottle of Coppercraft Premium Spirits is a tribute to the American Craftsmen. We build upon the legacy of our West Michigan tradition–the makers and manufacturers; creators and curators; designers and developers. We bring together grain, oak and time to craft the finest premium spirits. Every detail is considered in what we craft and blend, and how you experience it. Coppercraft spirits include rum, gin, vodka, citrus vodka, whiskeys and bourbon that can be found throughout Michigan. For info about spirits, restaurant menu and tours, visit: http://www.coppercraftdistillery.com.