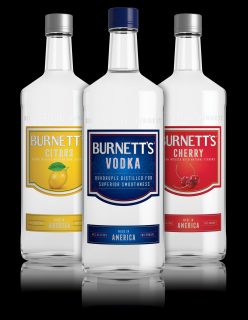 BARDSTOWN, Ky. — For the first time since its inception 25 years ago, Burnett’s Vodka is launching a major redesign of the bottle and package to align with continued growth trajectory. Burnett’s Vodka has been changing the game in the Vodka category for a quarter of a century, growing to become the number four domestic vodka with nearly three million cases sold annually. Heaven Hill Brands, the nation’s largest independent, family-owned and operated distilled spirits producer and marketer, announced today the redesign of the Burnett’s franchise.

“The Vodka category is a powerhouse within the spirits industry, and Burnett’s Vodka is a force that we are committed to seeing continued growth and innovation on,” said Max L. Shapira, President, Heaven Hill Brands. “As an iconic brand, our new bottle and label design celebrates the Burnett’s essence as a leader in fun and entertainment, while contemporizing the brand for the next 25 years.”

As one of the largest Vodka franchises, including 34 all-natural flavors, the updated look and bold new packaging modernizes the brand for both current and new consumers. The full Burnett’s Vodka franchise received a package update with a sleek, taller bottle, refined brand logo, “Sir Robert Burnett” blown in across the top of the glass bottle, and a new, updated cap. The Vodka flavors packaging also features updated, custom fruit illustrations. Key brand attributes of “gluten free” and “Made in America” adorn the new two-piece paper labels on the Vodkas.

A large-volume player at an accessible price point, Burnett’s Vodka welcomes new consumers with an approachable experience that starts with Burnett’s and ends with memories that last a lifetime. The brand rejuvenation builds upon the foundation set by loyal consumers as Burnett’s is ushered into a new era. Beverage Information Group awarded Burnett’s Vodka with consecutive Established Growth Brand Awards from 2001-2017, the Fast Track Award in 2010 and 2015, and the Growth Brand Hall of Fame award in 2015. Burnett’s Vodka was also awarded the Impact Hot Brand award from 2006 to 2016.

The Burnett’s Vodka franchise package began shipping in February, along with new shippers to compliment the labels. Pricing on all products will remain the same. The Burnett’s website (www.burnettsvodka.com) provides information and drink recipes for all flavors. Details on all available proofs and sizes for Burnett’s Vodka are listed below: