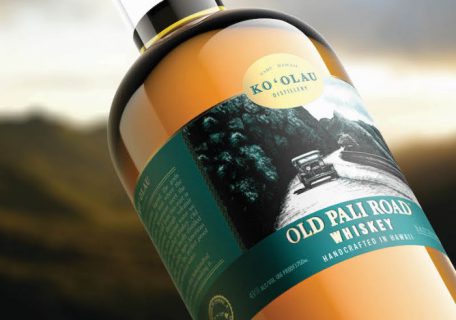 Kailua, Hawaii — Inspired by the beauty of Hawai‘i and the mystical majesty of the range that bears its name, Ko‘olau Distillery in Windward O‘ahu expects to be in full production in December.

The veteran-owned craft distillery will debut in the Hawai‘i market with its flagship offering, Old Pali Road Whiskey. It is an American-style whiskey and is the only aged, amber whiskey produced on O‘ahu.

Every batch of Old Pali Road Whiskey begins with pure Hawaiian water, filtered for decades through the volcanic rock of the Ko‘olau Range before flowing into an artesian well. Locally sourced corn provides the distinctive, bourbon-style base for the mash used to create Ko‘olau’s hand-distilled whiskey, which is then blended with true, five-year-old American whiskey.

The distillery and its brands were envisioned and created by decorated combat veterans in the U.S. Marine Corps. The partners, Lt. Col. Ian Brooks and Lt. Col. Eric Dill, have extensive and distinguished military careers, overseas deployments and time spent stationed here on O‘ahu. The whiskey-enthusiast friends and business partners chose Windward O‘ahu in part because they live there, but they live there because “if you spend any time on the Windward side, you realize what a special place it is. It’s different, it’s a unique place in a unique place,” said Ko‘olau Distillery co-founder Ian Brooks.

No other company on O‘ahu is producing whiskey that has been aged in wooden casks, said co-founder Eric Dill.

“The science and art of whiskey-making fascinates me and there is something exceptionally gratifying about making your own.

The craft distillery will limit production to fewer than 10,000 bottles a year to start, creating batches of eight barrels at a time. (One barrel contains 53 gallons, the equivalent of roughly 195 liters, or about 267 750-milliliter bottles.)

Old Pali Road Whiskey will soon be available at retail and at restaurants and bars around the islands, as well as via e-commerce. For local residents and visitors, distillery tours and tasting events are planned.

“You’re either part of Hawai‘i or you’re not,” Brooks said. “This is where I’m bringing in jobs, bringing things to Hawai‘i instead of just taking. We want to make a quality product that pays homage to the idea of what Hawai‘i represents. That is what we want to share with people,” he said.

Ko‘olau Distillery hand-bottles the finest made-in-Hawai‘i, delicious craft spirits using pure, volcanically filtered Hawaiian water from an artesian well. It is a veteran-owned business, exacting in its standards, that seeks to serve all with honor, respect and the best-possible experience. Just as our founders dedicated their lives in service to the country with the United States Marine Corps earning honors and commendations — often at great sacrifice — they believe in earnest stewardship of the land and its finite resources. From our hearts to your homes and establishments, our Hawai‘i-based business would love to hear from you via email, our website, or by phone. Phone (808) 225-3457; info@koolaudistillery.com. Visit us online at koolaudistillery.com.

Cleaning Up: Yerba Mate Breaks Out as Natural Energy Rises

Taste Radio: From ‘Z’ To A — How This Fast-Growing Brand Flipped The Script To Win On Shelf