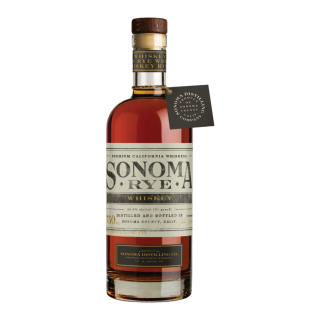 Rohnert Park, Calif. – Now in its eighth year, Northern California grain-to-glass whiskey pioneer, Sonoma Distilling Company (formerly Sonoma County Distilling Co) announces several key company developments in the final quarter of the year, speaking to the brand’s continued growth and evolution in the national craft spirits arena. From the roll-out of refined packaging and the launch of an annual Distiller’s Edition series of seasonal whiskey releases, to an expanded production facility and steady growth plan, Sonoma Distilling Company is primed for a new chapter, one which solidifies its long-term commitment to being California’s premier whiskey producer.

This month, the brand rolls out new branding, designed by award-winning Central California-based beverage branding team Makers & Allies (San Luis Obispo). The new bottle design, labels and assets communicate the craft luxury nature of Sonoma Distilling Company’s Premium California Whiskeys and a connection and commitment to a “sense of place” – taking design cues from the unique blend of both industrial and agricultural (including winemaking) surroundings of the Sonoma County-based distillery (among the first in wine country). Textures and colors like copper, metal, wood, grains, and water are presented with bold, vintage-inspired fonts, fusing modern and innovative with traditional – synonymous with the Sonoma region and, importantly, with Sonoma Distilling Company’s approach to its craft. The result is a look and feel which reflects the brand’s journey and ethos: established and high-quality luxury, yet artisanal and sustainably-minded.

“After eight years of focusing entirely on refining and improving the whiskey in our bottles, we were ready to shift to packaging which reflected the maturation of both the company and brand and our commitment to continued leadership as a premier Sonoma-based California whiskey house,” states Adam Spiegel, Sonoma Distilling Company Founder and Whiskeymaker. “With an established and growing distribution channel (CA, NY, IL, MN, FL and throughout Europe), we were looking for packaging which would speak for itself in the market as a high-quality, luxury craft whiskey brand, yet one with its roots in this artisan-focused community of Sonoma. The packaging created by Makers & Allies reflects our values and craft, while expressing the nuances which make our whiskey – and our production heritage and origins – unique.”

Well-timed to the fall and holiday season ahead, the brand has launched this month two highly regarded expressions: Sonoma Cherrywood Smoked Bourbon (formerly West of Kentucky #1, awarded 95 points by Jim Murray in the 2018 Whiskey Bible) and Sonoma Cherrywood Rye Whiskey, which together comprise the new ‘Distiller’s Edition’ seasonal releases (both offered at $49.99 SRP) — expressive products that give the small distillery a chance to create uniquely flavorful and distinctive whiskeys that aren’t found anywhere else. Given the new packaging launch, the Distillery has rolled out the duo together for the holiday season ahead, but beginning in 2019, the Sonoma Cherrywood Rye Whiskey will be released each spring beginning in 2019 and the Sonoma Cherrywood Smoked Bourbon will be the distillery’s special annual fall release. The brand’s flagship expressions, Sonoma Rye Whiskey and Sonoma Bourbon Whiskey (formerly West of Kentucky #2), will continue to be offered annually, in both 750 ml and – new this fall – 1 Liter format (for on-premise only). The full portfolio:

Sonoma Rye Whiskey –  Sonoma Distilling Company’s very first whiskey release: aged for a for a minimum of 15 months (in smaller cooperage) with majority of blends coming from bigger barrels aged above two years. At 46.5% ABV and 93 proof, this Rye Whiskey has a vanilla, allspice, white pepper, dried apricot and walnut finish.  (SRP $39.99 in CA, $44.99 in other states)

Sonoma Bourbon Whiskey – A Sonoma made, traditional wheated bourbon, aged for a minimum of 15 months (in smaller cooperage) with majority of blends coming from bigger barrels aged above two years. At 46% ABV/92 proof, this Bourbon has notes of toasted vanilla, almond, toffee brittle and coffee. (SRP $39.99 in CA, $44.99 in other states)

Cherrywood Smoked Bourbon (Distiller’s Edition) – Slated for release each fall, this seasonal whiskey is crafted with 13% local cherrywood-smoked malted barley and aged for a minimum of 15 months (in smaller cooperage) with majority of blends coming from bigger barrels aged above two years and bottled at 46% ABV/95.6 proof.  The result is earthy smoke, maraschino cherry, allspice and vanilla. (this whiskey is released now, with limited allocation in CA, NY, United Kingdom and France.) (SRP $49.99)

Cherrywood Rye Whiskey (Distiller’s Edition) – Beginning in 2019, this one-of-a-kind rye whiskey will be released each Spring. It’s aged for a minimum of 15 months (in smaller cooperage) with majority of blends coming from bigger barrels aged above two years.  At 47.8% ABV and 95.6 proof, the Cherrywood Rye Whiskey has a flavor profile of dried figs, toasted almonds, brandied cherries and new leather. (SRP $49.99)

A Future of Steady, But Significant Growth

With the recent acquisition of neighboring warehouse space and additional stills to create room for expansion, Sonoma Distilling Company is entering into a new phase of development and growth – one which further speaks to its dedication to being California’s premier craft whiskey. While the company has had sustained growth cultivated over the past eight years, owner Spiegel is looking at the long term and determined to grow only as quickly as quality allows, with a primary focus on crafting a whiskey that lives up to the region that they represent.  Spiegel is looking at new equipment and a larger fermentation capacity, an incremental plan to expand his staff, and potentially increase from one distillation per day to two. Sonoma Distilling Company is primed for significant capacity growth over the next five to ten years.  The brand is currently distributed in five U.S. markets— California, New York, Illinois, Florida and Minnesota—as well as in the U.K., France, Germany, Australia, Italy and Spain.

Founded in 2010 by San Francisco native Adam Spiegel, Sonoma Distilling Company is one of the first 200 distilleries in the country, a pioneer whiskey producer in California and one of the very first in Sonoma wine country. Spiegel discovered his passion for creating spirits in 2008, while assisting a distiller friend in Santa Rosa, Sonoma County. From there, Sonoma Distilling Company was born. Spiegel and his team focus on handcrafting small batch-produced whiskey, from grain-to-glass, using old-school style stills to create whiskeys that are authentic and unpretentious, steeped in traditional values, but fueled by the evolved needs of the modern palate. Since its inception, Sonoma Distilling Company has employed sustainable processes as a core part of its business model, using natural resources like wind and ambient temperature of their location so as to have less of an ecological footprint. Every level of production at Sonoma Distilling Company is handled in-house, including the milling, mashing and fermentation of grains, handmade copper alembic pot distillation, American oak barrel aging, bottling and labeling. Sourcing only the finest non-GMO grains from California farmers and from around the world, Sonoma Distilling Company takes great pride in using the power of the dollar to work with those with whom they share a matching ideology. Through a mindful approach, hard work, and time-honored techniques, Spiegel and his team have pledged their enduring commitment to producing world-class whiskeys. Sonoma Distilling Company is California’s Premium Whiskey. Visit www.sonomadistillingcompany.com for further information.

On and Off Premise Sales Rep Positions Open - C...