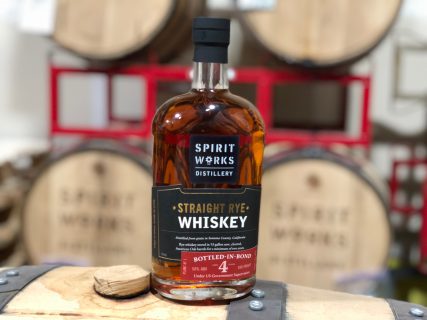 SEBASTOPOL, Calif. — Spirit Works Distillery announced today that it has released its first ever Bottled in Bond – Straight Rye Whiskey. As an effort towards regulating spirits industry at the time, the US Government passed the Bottled in Bond Act of 1897, dictating a very strict set of quality standards and control of production practices for a spirit to be labeled as such.

Still in place today, but difficult to achieve and even harder to come by, a spirit can only be labeled Bottled in Bond – by U.S. Government Supervision if it is:

In addition to the above, the label on the bottle must also state the location of the distillery and if bottled elsewhere, where it was bottled.

“I am thrilled for Spirit Works Distillery to have reached this milestone as our Bottled in Bond – Straight Rye Whiskey is a beautiful, welcome declaration of a true small batch, high rye whiskey and the very distinction represents genuine quality, consistency, and age,” said Ashby Marshall, Former Head Distiller and Co-owner.

Bottled at 4 years 2 months old and 100 proof, the Rye Whiskey has a nose towards both bright and baked apple followed with coffee and leather. On the palate it brings peppery hints of clove, and nutmeg that mellow into a blend of caramel and toasted coconut. The finish of golden honeycomb rolls down to a long smooth spice.  Bottles can be purchased, as of today for $60, out of the distillery tasting room in Sebastopol and are planned to be in market in due course.

Founded in the heart of Sonoma County, California in 2012 by husband and wife team Timo and Ashby Marshall, Spirit Works Distillery is craft spirits producer which handcrafts artisan Vodka, Gin, Sloe Gin, Barrel Gin, Navy Strength Gin, Straight Wheat and Straight Rye Whiskey onsite using the grain-to-glass method of milling, mashing, fermenting and then distilling onsite, allowing the Distillery to create a truly hands on premium product. Spirit Works is also one of the few all-female distilling teams in the US with Lauren Patz as Head Distiller.