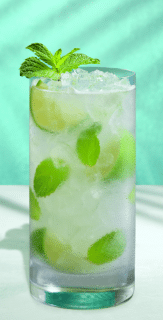 HAMILTON, Bermuda– Bacardi rum is ushering in the spring season with the launch of its most refreshing flavor innovation yet, Bacardi Lime. Whether it’s a weekend brunch cocktail with friends or a summer music festival, Bacardi Lime is a vibrant and flavorful choice for any warm weather drinking occasion.

As people seek out more high quality, natural flavors for their cocktails, spirits drinkers will love the latest addition to the iconic rum brand’s flavor portfolio. Regarded as one of the top choices for fruit infusions in beverages and the most popular fruit purchased to be paired with rum, Lime was the obvious choice for the new Bacardi flavor innovation.

“As soon as the weather warms up, people are ready to take their drinks outside, whether it is for an outdoor barbecue, party on the beach or happy hour on a rooftop bar, Bacardi Lime is the perfect complement to these spring and summertime occasions,” said Roberto Ramirez Laverde, VP, Bacardi for North America. “We have watched the flavor space grow year after year and we know that consumers are going to embrace this new infused rum, especially when they’re on the hunt for a refreshing new cocktail.”

Just like the other flavors, Bacardi Lime begins with a base of Bacardi Superior white rum and is then infused with natural lime flavors, providing an intense flavor with aromas of lime zest and natural bright citrus notes. In fact, for those looking for a lower calorie cocktail alternative, one ounce of Bacardi Lime, when mixed with soda, is only 74 calories.

Starting this month, Bacardi Lime will be available for a suggested retail price of $12.99 (750ml) and at select bars and restaurants nationwide.

Paint the town lime this summer with these new refreshing cocktails:

Method: Add all ingredients into a punch bowl or carafe with ice and stir. Garnish with lime wheels.

Method: Add the lime wedges, sugar and mint leaves and gently muddle until the limes release juice. Add Bacardi Lime Flavored Rum and mix the ingredients with a bar spoon. Fill with crushed ice and stir once again. Add club soda and garnish with mint.

Method: Combine all ingredients in a blender with 2 cups of ice. Blend until smooth. Serve into a rocks glass. Garnish with lime wheel.

Method: Pour ingredients over ice. Garnish with a lime wheel.

In 1862, in the city of Santiago de Cuba, founder Don Facundo Bacardí Massó revolutionized the spirits industry when he created a light-bodied rum with a particularly smooth taste – Bacardi. The unique taste of Bacardi rum inspired cocktail pioneers to invent some of the world’s most famous recipes including the Bacardi Mojito, the Bacardi Daiquirí, the Bacardi Cuba Libre, the Bacardi Piña Colada and the Bacardi El Presidente. Bacardi rum is the world’s most awarded spirit, with more than 800 awards for quality, taste and innovation. Today, Bacardi rum is made mainly in Puerto Rico where it is crafted to ensure the taste remains the same today as it did when it was first blended in 1862. Visit bacardi.com.

The Bacardi brand is part of the portfolio of Bacardi Limited, headquartered in Hamilton, Bermuda. Bacardi Limited refers to the Bacardi group of companies, including Bacardi International Limited.