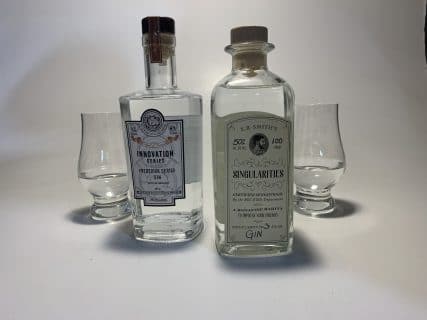 BALTIMORE– McClintock Distilling and The Baltimore Spirits Company (BSC) has announced that they are separately releasing two limited-edition gins as a collaborative endeavor. The project between the two Maryland distilleries uses rye whiskey mash infused with signature botanicals to create a Genever-style gin made in the traditional Dutch fashion. McClintock Distilling used mash from BSC’s Epoch Rye and BSC used mash from McClintock’s Bootjack Rye Whiskey.

While BSC has undertaken collaborative projects before, such as with their neighbor Union Brewing, this is the first collaboration of its kind between two Maryland distilleries. The project comes after almost two years of planning and will highlight Maryland’s rich tradition in rye-based spirits as well as the ingenuity the companies are known for. Both distilleries are active members of the Maryland Distiller’s Guild and work to promote the industry in the state.

Genever-style gins are distinct from other gins in that the flavor of the grains are preserved and act to highlight the botanicals to create a kind of whiskey-gin hybrid. It is the oldest style of gin in the world but is one of the rarer varieties in the US. While traditional Genever is made using malted barley, these collaborative products use the spicier and more peppery rye base making them unique expressions.

“Both of our distilleries are passionate about whiskeys and gins and this was a natural collaboration,” said Braeden Bumpers, owner of McClintock Distilling. “We are so excited to finally release this project and we are thrilled with the way they both came out.”

About half of the finished product will be released at McClintock Distilling in Frederick, Maryland and at the Baltimore Spirits Company Distillery in Baltimore, Maryland on August 17th. The other half will be barrel-aged in used rye whiskey barrels for a second release at a later date. Only a few hundred bottles of the collaboration will be produced and both distilleries expect to sell out fast.

McClintock Distilling, an organic craft distillery located in Frederick, Maryland, offers vodka, gins, and whiskeys. McClintock Distilling strives to maintain a sustainable and locally sourced business with a focus on product quality, environmental impact, and community betterment. McClintock Distilling is committed to bringing the McClintock experience to all of our customers through every drop. For more information please visit mcclintockdistilling.com.