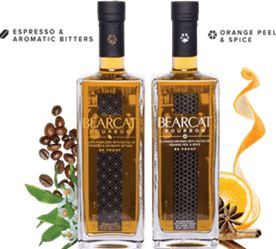 OWENSBORO, Ky.– Bearcat Infused Bourbon, the 80-proof infused bourbon created in honor of female distillers, bootleggers and industry innovators, is thrilled to announce added distribution at Meijer stores throughout Michigan this fall. Currently available in seven states including Illinois, Minnesota, Wisconsin, Rhode Island, Massachusetts, and now Michigan and Indiana, the brand is thrilled to launch at nearly 100 Meijer stores in cities such as Detroit, Ann Arbor and Grand Rapids. The Meijer distribution will also extend to select Indiana locations of the Grand Rapids-based grocery chain.

“The rising growth of the Bearcat Infused Bourbon brand and the overall bourbon industry is tremendous,” says CEO Jason Kane. “Not only is the bourbon industry growing with record breaking sales but the spirits industry as a whole has seen increased consumer interest in flavored spirits. As the first infused bourbon on the market, we are uniquely positioned to offer consumers the best of both worlds.”

Perfect for first time bourbon drinkers and a go-to for seasoned connoisseurs, Bearcat Infused Bourbon offers a contemporary, flavorful and accessible bourbon, with two infused options: Orange Peel with Spice and Espresso with Aromatic Bitters. The Espresso is complex to the nose with roasted espresso beans appearing on the finish, while the Orange Peel is packed with a fresh citrus aroma, and mild cinnamon and anise flavors at the end. Both were designed to be enjoyed neat or on the rocks, or as an extra and flavorful punch to classic and innovative cocktails.

“Being readily available in Meijer stores is a huge development for the brand,” says founder Mark Szumowski. “We’re thrilled to be expanding across the Midwest and look forward to converting more first-time bourbon drinkers to Bearcat loyalists.”

For a full listing of locations where Bearcat Infused Bourbon is available, please visit bearcatbourbon.com.