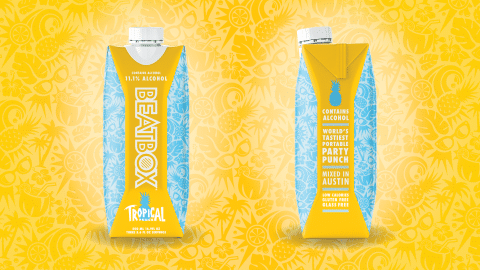 AUSTIN, Texas— BeatBox Beverages is releasing a punched-up version of a favorite summer flavor to its line of the “World’s Tastiest Party Punch.” Tropical Punch is packed with fresh fruit flavors and bursts of crisp, refreshing notes. This will be the fifth flavor in the Party Punch lineup, joining Pink Lemonade, Blue Razzberry, Fruit Punch and Fresh Watermelon.

The company that has mastered the science of eco friendly wine-based party drinks hopes to keep up momentum after the Spring launch of its widely popular Fresh Watermelon flavor. “With the support of our amazing distribution partners, BeatBox Party Punch is continuing record growth trends and already surpassed all of 2018’s volume in the first 6 months of this year,” said Jeff Chassner, BeatBox’s VP of Sales.

The brand has certainly kept busy staying in front of its primarily Millennial customer base, having sponsored some of the biggest music festivals in the US, including Rolling Loud, SplashHouse, and the upcoming Imagine Music Festival in Atlanta. The release of Tropical Punch is an exciting step for the company as it will also mark the roll-out of a fresh package design for the entire BeatBox Beverage lineup.

Tropical Party Punch is now available for order and will be on shelves in mid-August. The newest party punch will be released in a 500 ml single-serve resealable Tetra Pak that makes it easy for consumers to take on the go.

In just his first 6 months with the company, VP National Accounts, Jeff Mcnally, has already secured distribution with the likes of Circle K, Sheetz, 7-11, and several other major convenience chains. He added, “Our retail partners appreciate that BeatBox Party Punch is driving Millennial Traffic into stores with a trade-up offering in a fast-growing category driving incremental revenue on each transaction.”

United through a love of music and inspired by the entrepreneurial spirit of Austin, Texas, the founders of BeatBox Beverages set out to create something that could help everyone #PartyBetter. One year later they made Shark Tank, walking away with the biggest investment the show had made at that time, $1million from Mark Cuban. Later adding on a team of industry veterans from Austin Eastcider, InBev, MillerCoors, Deep Eddy, and Tito’s, to name a few – who know how to develop, launch, and quickly grow authentic brands. BeatBox Beverages’ reputation was secured as a company that creates products that drive incremental profit in high-growth categories with specific expertise in the Millennial target.