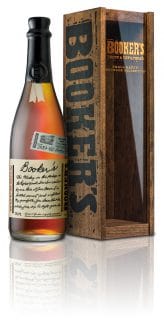 CLERMONT, Ky.— Booker’s Batch 2019-02 is an ode to a bygone distillery “tradition” that helped inspire sixth generation Beam master distiller Booker Noe to create his namesake bourbon more than 30 years ago. Back then, some distillery rackhouse workers would sneak a taste or two of whiskey straight from an aging barrel using plastic tubing – called “mules” – that they carried in their overalls. In doing so, their bellies would rub on the side of the barrel, removing dust and shining it up. Some used to say, “the shiner the barrel, the sweeter the whiskey,” and those shiny barrels were often found in the center cut of the rackhouse where the temperature and humidity were just right.

When Booker Noe was ready to lay down the first barrels of the bourbon that would eventually bear his name, he knew it had to be in the same area of the rackhouse as “the shiny barrels” – that’s where the good stuff was. And while the days of mules are long gone, Seventh Generation Master Distiller Fred Noe still ages Booker’s Bourbon barrels in the middle floors of the rackhouses to uphold Booker’s high standards.

Like all batches of Booker’s Bourbon, Booker’s “Shiny Barrel Batch” was selected by Fred Noe to ensure it upholds the qualities and standards that fans of the brand have come to know and love. Uncut and unfiltered, this batch was chosen with the following characteristics:

Booker’s Bourbon is one of the only bourbons available today that is bottled uncut at its natural proof, yielding an intense flavor and nose that is one-of-a-kind. Inspired by a 200-year-old family tradition, Booker Noe, Jim Beam’s grandson and 6th GenerationMaster Distiller, first created Booker’s Bourbon as a Christmas gift for his close friends and family. Taking barrels found in the center-cut of the rackhouse, Booker bottled the bourbon straight-from-the-barrel, creating Booker’s Bourbon, a true barrel bourbon. Today, Master Distiller Fred Noe personally tastes and selects every batch of Booker’s Bourbon before it is bottled to ensure that it matches Booker’s personal preference for a robust and full-bodied whiskey.

The 2019 Batch Collection will feature four batch releases, each released in limited quantities and featuring a unique label and batch name honoring founding distiller Booker Noe, his love of family and his spirit of experimentation.

Booker’s “Shiny Barrel Batch” is available nationwide beginning in May in limited quantities with a SRP of $79.99 for a 750 mL bottle. For more information on Booker’s Bourbon, visit BookersBourbon.com