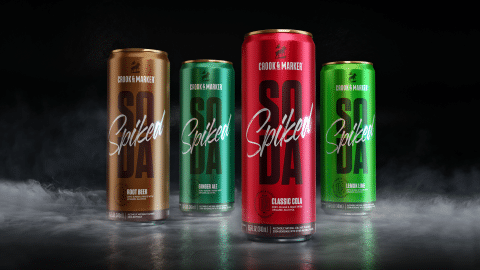 HAMILTON, N.J.— Crook & Marker, an alcohol brand from beverage innovator Ben Weiss, is launching a new line of Spiked Sodas made with organic alcohol and zero sugar to deliver consumers the classic soda taste they’ve been longing for –– without the regret of consuming excessive calories, artificial ingredients and loads of sugar. Crook & Marker Spiked Sodas will be available in Classic Cola, Lemon Lime, Ginger Ale and Root Beer flavors and will begin rolling out in select regional markets in October, with a national launch expected for early 2020.

“Soda has become a bad four-letter word in many households across America – not because anyone ever fell out of love with the taste of soda, just the sugar and broken ingredients that came with it,” said Weiss, Founder of Crook & Marker. “When other alcohol companies tried hard sodas, they didn’t bother fixing the ingredients, which is why consumers never held on. Imagine dumping 15 packets of sugar into your drink, which is what some of those brands are doing! That’s all about to change. Crook & Marker Spiked Sodas deliver the classic, refreshing soda taste that we all love –– finally, without the sugar or artificial sweeteners.”

Crook & Marker Spiked Sodas are made with the company’s proprietary organic BaseBrew® alcohol. BaseBrew alcohol is made from ancient grains and superfoods — including quinoa, millet, amaranth and cassava root — then brewed and meticulously filtered until it’s perfectly polished and smooth. Crook & Marker Spiked Sodas are sugar-free, caffeine-free, sweetened from natural sources, gluten-free, non-GMO and vegan, with 80 calories, no artificial flavors and less than 1g net carbs per can and 4% ABV.

“We see today’s consumers, particularly millennials who are now all of legal drinking age, reject sugar, carbs and ultimately calories, but still demand great flavor and enjoyment. We believe hard seltzers were just the first stop in their pursuit for a better way to drink,” Weiss continued. “Crook & Marker’s mission is to lead the industry away from bland and compromised ingredients and give consumers what they’re seeking — a portfolio of adult beverages that are perfect for having a good time and deliver bold flavor, variety and transparency.”

Weiss previously founded Bai Antioxidant Beverages, flavor-packed drinks with 5 calories, 1 gram of sugar and no artificial sweeteners. Bai became one of the fastest-growing brands in the beverage industry before Dr Pepper Snapple Group acquired the business for $1.7 billion in 2017. The Bai consumers have since grown up, and Weiss has introduced a portfolio of adult beverages that meets their needs and expectations.

Crook & Marker Spiked Sodas will be available in single-flavor 4-packs and sold in retail stores, bars, restaurants and other locations nationwide.

Crook & Marker, a new brand from beverage innovator Ben Weiss, delivers today’s consumers vibrant, flavor-filled drinks that have zero sugar and are made with organic alcohol.

Crook & Marker’s unique name comes from the black sheep, which is also known as a “Marker.” A shepherd places one Marker among every 100 white sheep to help them identify the flock with a standout. As they watch over them, the shepherd wields a heavy “Crook” to corral their sheep. The Marker is believed to be the fighter who resists the shepherd’s power and refuses to be penned, much like Crook & Marker’s vision to stand out among the traditional beverage crowd.