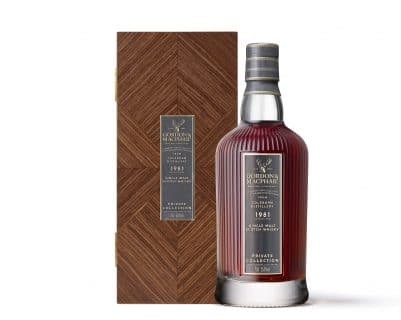 ELGIN, United Kingdom– Single malt whisky creator Gordon & MacPhail has announced its Spring Collection, unveiling a series of stunning whiskies which draw upon the unrivaled depth and breadth of knowledge the company has gained from maturing spirit from over 100 Scottish distilleries.

One of the highlights of the Spring Collection is the Gordon & MacPhail 1981 from Coleburn Distillery which is the latest edition to the “Private Collection” range.  This exceptional whisky has been maturing in the company’s specially selected cask at its warehouse in Elgin for 38 years. Spirit from Coleburn Distillery – mothballed in 1985 – was traditionally used in blending but Gordon & MacPhail carefully matched the spirit with a first fill Sherry hogshead to create this extraordinary and very rare single malt.

Hidden from sight behind a rich green landscape, Coleburn Distillery was founded in 1897 in Longmorn, five miles south of Elgin in Speyside. Designed by renowned architect Charles Doig, who also designed the Gordon & MacPhail retail shop in Elgin, the distillery was one of many that closed its doors during a challenging period for the whisky industry in the 1980s.

Laid down on March 11, 1981 to mature in cask 476, Gordon & MacPhail 1981 from Coleburn Distillery was bottled at 55.9% ABV on March 14, 2019. With a distinct mahogany hue, the new release has rich flavours of Sherry-soaked fruit, liquorice and dark chocolate, and a long finish brimming with toffee notes and a hint of smoke.

Only 101 bottles will be available for purchase worldwide, representative of the unique nature of all “Private Collection” releases.

Established in 1895, Gordon & MacPhail has a worldwide reputation for creating exquisitely rare single malts that have featured spirit from over 100 distilleries across Scotland.Due to the foresight of four generations of the Urquhart family, owners of Gordon & MacPhail, the company is currently maturing spirit from 26 mothballed or closed distilleries, including Coleburn Distillery, in its fabled warehouse.

Stephen Rankin, Gordon & MacPhail’s director of prestige and member of the fourth generation of the Urquhart family, said: “Our mantra has always been to ‘do right by the whisky’; recognising when it has reached its ultimate peak and then bottling it regardless of commercial pressures or notable birthdays. Brought to you as a rare single malt, this 38-year-old release exhibits the true spirit of the Coleburn Distillery. My grandfather, George Urquhart, was always keen to champion the quality of the new-make from previously unheralded distilleries and this remarkable whisky perfectly exemplifies his vision. It’s one to celebrate and savour.”

Two more notable whiskies from the 2019 Spring Collection include Connoisseurs Choice 1998 from Glenburgie (UK RRP £136). With just 245 bottles available, this whisky offers a unique opportunity to own a 20-year-old whisky which is rarely bottled as a single malt. Connoissuers Choice 2006 from Ledaig Distillery offers a striking whisky which has been carefully crafted using peated new-make spirit, expertly paired with a specially selected first-fill Sherry hogshead (UK RRP £73).

For more information on the Spring Collection, please visit gordonandmacphail.com/our-whiskies/ranges/spring-collection/

Established in 1895, family-owned Gordon & MacPhail is curator of some of the world’s finest and rarest single malt Scotch whiskies from over 100 distilleries. Four generations of the Urquhart family have continued to pursue the perfect partnership between spirit and cask. Since its foundation, Gordon & MacPhail has carefully matched spirit to the highest quality oak casks which are sent to distilleries throughout Scotland, filled with new-make spirit, and matured either at the distillery of origin or in the firm’s own bonded warehouse in Elgin. It is this simple but endlessly complex pairing that creates an intriguing and unique portfolio of expressions – single malts that Scotch whisky lovers will not find anywhere else.