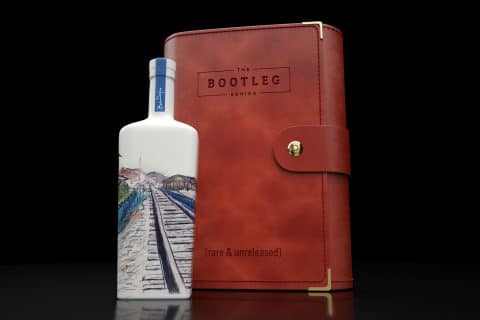 NASHVILLE, Tenn.— Heaven’s Door Spirits, which produces an ever-evolving collection of American whiskeys in collaboration with Bob Dylan, announces the first expression of its limited edition Bootleg Series, a rare 26-year old whisky finished in Japanese Mizunara Oak barrels. This first release, dubbed Volume 1 of the Bootleg Series, is both a celebration of the creative spirit of Bob Dylan and the craft of fine whiskey at its best. Offered in hand-made ceramic bottles featuring one of Bob Dylan’s best-known paintings, Train Tracks, this 2019 Edition comes beautifully housed in a uniquely designed and individually numbered collectible leather journal.

The 2019 edition of the Bootleg Series gives nuance to this whisky through a secondary aging in Mizunara Oak barrels, resulting in a distinctive and supple flavor profile. Bottled with a proof of 111.5, the low rye content of this whisky’s mashbill allows for the signature flavors from the Mizunara Oak barrels to shine through, with a smooth, long finish.

“The unusually long maturity of the whisky is balanced with the acquired notes of coconut, coriander and a native incense of Dīngxiāng (clove)” said Ryan Perry, Master Blender, Heaven’s Door. “The Mizunara Oak offers an exotic taste and lingering finish found in some the best Japanese whiskies. We’ve been working on this release for many years and are thrilled with the end result.”

The Bootleg Series, which is named in tribute to Bob Dylan’s famed series of retrospective albums, will feature annual limited edition releases of specially crafted new whiskeys, uniquely aged, blended or finished, for a one-of-a-kind offering. Each annual release will be presented in hand-made ceramic bottles featuring one of Bob Dylan’s paintings, with each bottle being housed in its collectible case.

With fewer than 3,000 bottles for sale at a suggested retail price of $499.99 for a 750ml bottle, the 2019 Edition of The Bootleg Series is now available for pre-order via ReserveBar.com/products/the-bootleg-series-by-heavens-door and will be online and in select retailers nationwide in early December. Each Volume of the Bootleg Series is a one-time release, and once all the bottles are sold, they will be gone for good.

Heaven’s Door’s portfolio of whiskeys is available nationwide and online via Reservebar.com/collections/heavens-door. For more information about the brand visit heavensdoor.com or engage with the brand on Instagram, Facebook or Twitter.

Heaven’s Door Spirits is a collaboration between legendary artist Bob Dylan and Spirits Investment Partnership (“SIP”). Heaven’s Door Spirits is Bob Dylan’s first and only consumer brand partnership in his 50 years as a worldwide cultural icon, which makes this collaboration unique and important – a true interplay of art, craft and commerce. Website: heavensdoor.com.

Bob Dylan is generally regarded as one of the world’s most influential and groundbreaking artists. In the decades since he first burst into the public’s consciousness via New York City’s Greenwich Village folk music scene in the early 1960s, Bob Dylan has sold more than 125 million records and amassed a singular body of work that includes some of the greatest and most popular songs the world has ever known. He continues to traverse the globe each year, performing more than 100 concerts annually in front of audiences who embrace his new material with the same passion as his classic output. In recent years, his work as an author and visual artist has further burnished his popularity and acclaim; a worldwide best-selling memoir, Chronicles Vol. 1, spent 19 weeks on the New York Times Best Seller List, in 2004, and several major exhibitions of his paintings and iron gates have been shown in recent years at some of the world’s most prestigious museums and galleries.

Bob Dylan’s contributions to our culture have been recognized with numerous honors and accolades. In December 2016, he was awarded the Nobel Prize for Literature by the Swedish Academy “for having created new poetic expressions within the great American song tradition.” In 2012, he was awarded America’s highest civilian honor, the Presidential Medal of Freedom, by President Barack Obama. In addition to winning 11 Grammy Awards, Dylan has achieved six entries in the Grammy Hall of Fame, which honors recordings of “qualitative or historical significance” at least 25 years old. Bob Dylan recently released his 38th studio album, a triple-album set aptly titled, Triplicate.

Spirits Investment Partners (SIP) is a boutique spirits innovation and brand development company comprised of a team of highly seasoned distilled beverages professionals with expertise in branding to production, sales and marketing, and finance.