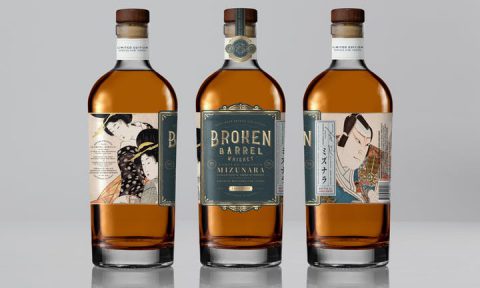 LOS ANGELES— Infuse Spirits Group L.L.C., the first and only single-bottle infusion company and the spirit industry’s most popular craft infusion company, is excited to announce the rebranding of its whiskey line under the aptly named Broken Barrel Whiskey Co.

When Infuse Spirits first expanded its portfolio to include a Kentucky Bourbon called Broken Barrel, followed by the gold-medal winning Heresy Rye Whiskey, both delivered a message and method that became instantly discernible from Infuse’s vodkas and bitters. Whereas Infuse Spirits continues to steep its ingredients in the single-bottle infusions, Broken Barrel finishes and matures it’s whiskey with French Oak, ex-bourbon, and sherry cask staves in tanks before straining and bottling. This not only separates the two brands by process and style but illustrates how Broken Barrel Whiskey is unapologetically different from other whiskeys. Similar to a mash bill and equally as important, the company’s coined process called the Oak Bill—the selection of various oak barrel staves used to finish our products—is what defines the whiskey.

In this way, “the whiskeys follow their own path and seek to create a name for themselves by adhering to principles of originality, boundary-crossing, and unapologetic authenticity. By adding the barrel to the whiskey, not the whiskey to the barrel concept, we have created something different,” says Founder and Creator Seth Benhaim. If you are a collector, feel free to snag the fleeting designs of the “Infuse Spirits” titled whiskeys, as these will be discontinued and likely gone by early 2020, if not sooner! However, Broken Barrel Whiskey’s core products, Broken Barrel Bourbon and Heresy Rye, will not change price or recipes—they’ll remain the same as everyone knows and loves them.

So, now, the question: how does a rule-breaking producer continue to push the envelope? The limited-edition Single Oak Series is Broken Barrel Whiskey’s latest innovation. Under the new brand name, the company is releasing one-of-a-kind, limited bottlings of its Single Oak Series, which will offer three distinct expressions of oak-infused whiskey—Mizunara (50 ABV, 750 ml); Isle Of Peat (55 ABV, 750 ml); and Cask Of Amontillado (55 ABV, 750 ml)—with a suggested retail price of $50.

As Seth explains, “We deliver one-of-a-kind collaborations by maturing American whiskey with rare oak from around the world. We’ve sourced our whiskey for these bottles from Kentucky and Indiana, and married each blend with oak barrel staves from all around the world: Japan for rare Mizunara oak; Scotland for peated Islay Scotch barrels; and Spain for aged amontillado sherry. Each barrel gives the whiskey a unique, rich, and complex taste and character not commonly found in American whiskey. Additionally, unlike Broken Barrel Whiskey’s core bourbon and rye, the Single Oak Series’ bases are all blends: Mizunara is a blend of five-year-old Kentucky and four-year-old Indiana corn whiskeys; Isle of Peat is a blend of American wheat and single-malt whiskeys; and The Cask of Amontillado is a blend of 12-year-old American whiskey and five-year-old Kentucky corn whiskey. The result is a synthesis nowhere to be found with traditional whiskey, and luckily, the project has paid off tremendously. The Single Oak Series has already won a few authoritative awards. At this year’s San Francisco World Spirits Competition, Isle of Peat received a Double Gold Medal in the Wheat Whisk(e)y category and Cask of Amontillado took home a Silver Medal in the Other Whisk(e)y category.

All three limited-edition expressions will be available nationwide in September 2019.

Taste Radio: Why Whole Foods Bit On — And Built Around — This ‘Wilde’ Concept