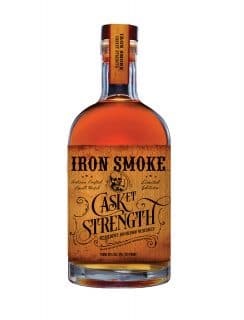 FAIRPORT, N.Y.— Iron Smoke Distillery, winner of prestigious Double Gold in this year’s North American Bourbon & Whiskey competition, and recipient of a 95.5 rating in the 2018 Jim Murray’s Whiskey Bible (for Iron Smoke Straight Bourbon Whiskey), is pleased to announce the release of their much anticipated CASKet Strength Bourbon.

Iron Smoke CASKet Strength Straight Bourbon Whiskey is a very limited quantity of their unfiltered, uncut, small batch bourbon. This rare and exceptionally complex 120 proof offering is handpicked from thousands of their very own triple char virgin white oak barrels. CASKet Strength has absolutely no liquid filler from any other source and delicious notes of butterscotch, vanilla and caramel.

Iron Smoke CASKet Strength is certain to be a game changer among fans of our flagship Straight Bourbon Whiskey and brown spirit enthusiasts across the country!” said President Tom Riggio. “This is based on the growing popularity of truly handcrafted cask strength and unfiltered offerings from pure hearted distilleries that have taken the long hard road of making their own products without any filler from outside sources. This release, as well as the recent accolades we’ve received from Forbes naming Iron Smoke one of the top 10 bourbons produced outside of Kentucky proves that we are building the brand the right way! We look forward to working with our distributors to make Iron Smoke a household name across the country.”

Based in Fairport, New York Iron Smoke Distillery produces distinct world-class bourbons and whiskeys that can be enjoyed neat or in classic cocktails. Producing the multiple award-winning Iron Smoke Straight Bourbon Whiskey, Iron Smoke CASKet Strength, Iron Smoke Single Barrel Special Reserve, Rattlesnake Rosie’s Apple Pie Whiskey and Rattlesnake Rosie’s Maple Bacon Whiskey in their 21,000-square foot facility. The flagship, Iron Smoke Straight Bourbon Whiskey is a four-grain bourbon mash bill, where a portion of the grains are lightly smoked with Applewood using the same process as a backyard smoker. As a New York State small-batch farm distillery, Iron Smoke uses local ingredients from Finger Lakes family farms within a 50-mile radius of our distillery, and our stripped mash is returned to the farms to be used as feed for their livestock. Their tasting room, the “Watering Room and Sideshow” is open Thursday-Sunday and features a fully licensed bar with all New York State Wines, Beers and Spirits as well as weekly live music and world-class entertainment. Follow Iron Smoke on Facebook, Twitter and Instagram.