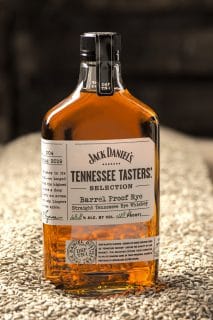 LYNCHBURG, Tenn.– The Jack Daniel Distillery has announced the release of the next two whiskeys in its Tennessee Tasters’ Selection series – Barrel Proof Rye, which is available now, and Reunion Barrel #2, which will be available this fall. Tennessee Tasters’ Selection is Jack Daniel’s line of limited-release, experimental whiskeys, each carefully chosen by Jack Daniel’s Master Tasters to deliver unique and diverse experiences.

Like the rest of the Tennessee Tasters’ Selection products, Barrel Proof Rye and Reunion Barrel #2 will be sold exclusively at the Jack Daniel Distillery and select stores throughout Tennessee. Each release is approximately 24,000 bottles and is followed by a new, limited release every few months.

Additional features of Barrel Proof Rye and Reunion Barrel #2 include the following:

“Our Master Tasters continue to amaze us throughout this series, and both Barrel Proof Rye and Reunion Barrel #2 are outstanding examples of that,” said Master Distiller Jeff Arnett. “We’re thrilled to release the first rye whiskey in this series through Barrel Proof Rye, which is sure to be a fan favorite for anyone who enjoys our Tennessee Rye. And we can’t wait for the fall release of Reunion Barrel #2, as the beer barrel finish is a new experiment that we can’t wait to share as a limited release.”

While each whiskey offers a unique taste, color and proof, they are all sold in 375-ml bottles at a price of $39.99 and available in limited quantities at the Jack Daniel Distillery and select stores across Tennessee. The bottles reflect sample bottles used daily by Jack Daniel’s Master Tasters and include a customized label, distillery name embossment on the front, and “Taster Sampler Bottle” mark on the back of the glass structure.