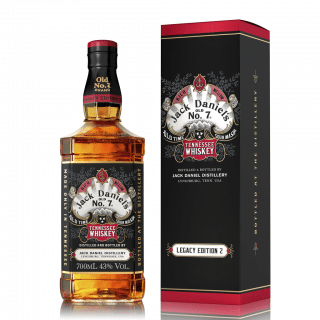 LYNCHBURG, Tenn.– The Jack Daniel Distillery has announced the second release in its Legacy Edition series, Legacy Edition 2, inspired by one of the distillery’s earliest black labels dating back to the early 1900s. Legacy Edition, which launched in 2018, presents limited-edition variations of labels used throughout the more than 150-year history of the brand.

Each unique label provides a tribute to the brand’s colorful history. Legacy Edition 2 marks the introduction of the first predominantly black color palette and includes a rope and anchor to symbolize Jack’s unmoving confidence. Three stars have been added to honor the distillery’s home state of Tennessee.

“Everyone recognizes Jack’s trademark black label, but very few realize that the Jack Daniel’s label has undergone many variations over the years, most of which looked very different from the one we know today,” said master distiller Jeff Arnett. “This second release in our Legacy Edition series is not only an ode to one of Jack’s first black labels, but also a symbolic celebration of our enduring spirit and commitment to a single great whiskey recipe for more than 150 years.”

The original version of the label that inspired Legacy Edition 2 featured a “medicinal use only” disclaimer, suggesting that this label was in use when alcohol was occasionally advertised to have medicinal properties, likely in the early 1900s. While this language won’t be featured on the Legacy Edition 2 label, much of its design remains true to the original inspiration.