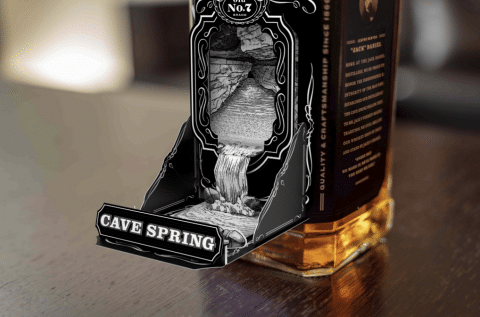 LYNCHBURG, Tenn.– Jack Daniel’s Tennessee Whiskey is rolling out an Augmented Reality (AR) app that will take consumers on a virtual journey of the Jack Daniel Distillery through a series of pop-up book style dioramas with more than 10 minutes of content providing an engaging experience rich with stories and visuals in a way that’s uniquely Jack.

“In today’s world, it’s important for us to reach fans and consumers where they are,” said Jeff Cole, modern media director for Jack Daniel’s. “That means sharing content that’s unique, interesting and relevant though a variety of digital mediums. In 2016, we launched an immersive Virtual Realty experience and in 2018 we launched our official podcast, ‘Around the Barrel.’ This new AR experience is taking our brand storytelling to the next level.”

Once consumers download the dedicated app, they can point their phones at any Jack Daniel’s Tennessee Whiskey bottle (from 50mL to 1.75L) to uncover the animations, voice overs and all the stories that make the more than 150-year old brand so special, from the Cave Spring water to the distilling process, to name a few.

Jack Daniel’s partnered with Tactic, a San Francisco-based company specializing in the production of immersive experiences, to develop the app.

“Augmented reality is in an exciting stage, and new technology and techniques are pushing the boundaries of what’s possible,” said Peter Oberdorfer, president of Tactic. “The Jack Daniel’s AR app features technology that sets the bar for creative storytelling in this new medium. The learnings and best practices from Jack Daniel’s will help inform the development of AR apps across different brands and industries.”

The AR experience is divided into three unique parts, each designed with the look and feel of hand-crafted models and integrate real-time, environmental lighting and textures. The first experience transforms the front label of the bottle into a miniature version of the Jack Daniel Distillery. The second walks step by step through the process of making Jack Daniel’s Tennessee Whiskey, and the third shares stories of the man himself, Jack Daniel.

The Jack Daniel’s AR app will be available for download in the US for both iOS and Android platforms on April 15.

Tactic is an innovation studio situated at the convergence of design and technology. Its team of engineers and designers develop unique immersive experiences for AR and VR media as well as interactive installations, 360° video capture, game engine content, wearables and other related technologies.