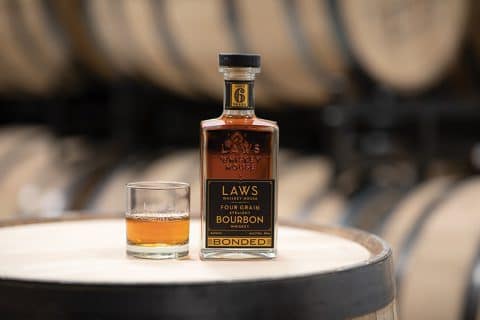 DENVER— Laws Whiskey House is releasing a 6-Year Bottled in Bond Four Grain Bourbon expression of its award-winning Four Grain Bourbon. Bottles will be available at the distillery on July 28; participating Colorado retailers will receive bottles in August, while supplies last.

This whiskey was aged for six years, exceeding the minimum four-year standards of the Bottled in Bond Act of 1897. The 6-year bonded Four Grain Bourbon will replace Laws Whiskey’s 4-year version, which has been a popular staple in the Laws portfolio for several years.

“The 4-year bonded Four Grain Bourbon has been a personal favorite of mine, but with the release of the 6-year expression, we’re raising the bar and shifting the bonded Four Grain to an older profile,” said Al Laws, founder of Laws Whiskey House. “This version produces smoother vanilla and caramel notes and an enhanced black cherry flavor that you don’t get from the 4-year version.”

A Bottled in Bond designation requires that the whiskey be a product of a single season, using the grain of a single season, made by one distiller at a single distillery, and aged at least four years in a federal government-bonded warehouse. This whiskey is then cut and bottled at 100 proof (50% ABV). By making bonded whiskeys, Laws continues to uphold the highest integrity in the whiskey-making process.

“Everyone at Laws is excited to present the new 6-year bonded bourbon with our friends, fans and extended village,” said Laws. “We continue to challenge ourselves to raise the bar on Colorado Whiskey as we improve and refine our craft.”

Established in 2011, Laws Whiskey House is a purpose driven, grain-to-bottle whiskey distillery founded on the principle that the soul of its whiskey is comprised of the people who grow it, the people who make it, and the people who drink it. Using the traditional method of open-air, on grain fermentation, Laws’ whiskeys feature high altitude grown American mother grains and mountain spring water while aging in 53-gallon charred American oak barrels. With a collection of award winning whiskey, including several Bottled in Bond expressions, Laws Whiskey House invites you to visit their tasting room in Denver’s historic Gates neighborhood and enjoy the Laws experience. For more information visit lawswhiskeyhouse.com.