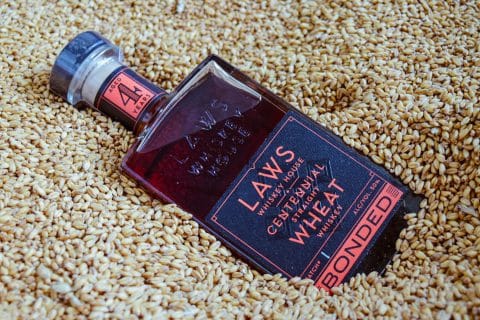 Bottled in Bond requires that the whiskey is a product of a single season, using the grain of a single harvest season, made by one distiller at a single distillery, and aged at least four years in a federal government-bonded warehouse. This whiskey is then cut and bottled at 100 proof (50% ABV). These rules are even more stringent than the U.S. standards for “Straight Whiskey.”

“We want to lead the charge on defining what wheat whiskey can be,” said Al Laws, founder of Laws Whiskey House.“The distinct flavors of this heirloom grain really shine for us in this expression.”

The 100% Colorado-grown wheat from Colorado Malting Company comes from the unique terroir of the San Luis Valley in southern Colorado, which imparts aromas of mountain strawberries and orange marmalade that accentuate hints of alpine meadows and wildflower honey. Jasmine tea, sage and spruce tips fade into pink peppercorns, with crisp linen on the mouthfeel. The spirit finishes dry with a slight bitter, candied orange finish.

Bonded Centennial Straight Wheat over ice brings the wheat character and flavors forward. For a refreshing take on a highball cocktail, add ice and soda to create the perfect summer drink.

This summer seasonal will be available at the Laws Whiskey House tasting room (1420 S Acoma St, Denver, CO 80223) and at participating liquor stores across Colorado while supplies last.

“This single grain whiskey release, which is consistent with our portfolio of serving top-notch niche bonded whiskey, showcases the robust flavor of Centennial Wheat planted specifically for us,” said Laws.

Established in 2011, Laws Whiskey House is a purpose driven, grain to bottle whiskey distillery founded on the principle that the soul of its whiskey is comprised of the people who grow it, the people who make it, and the people who drink it. Using the traditional method of open-air, on grain fermentation, Laws’ whiskeys feature high altitude grown American mother grains and mountain spring water while aging in 53-gallon charred American oak barrels. With a collection of award winning whiskey, including several Bottled in Bond expressions, Laws Whiskey House invites you to visit their tasting room in Denver’s historic Gates neighborhood and enjoy the Laws experience. For more information visit lawswhiskeyhouse.com.