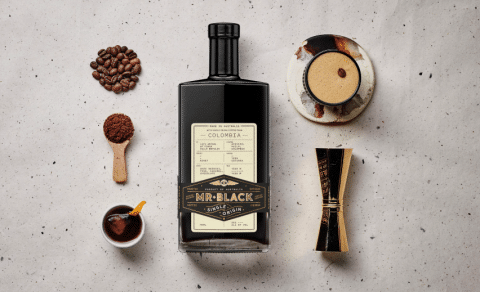 NEW YORK— Mr Black Cold Brew Coffee Liqueur, one of the fastest-growing craft spirits brands in the USA, officially announces their first Single Origin expression. Dedicated to bringing craft coffee into the night, Mr Black takes this approach to the next level with the new Single Origin series. Mr Black wishes to educate and to radically rethink the role of coffee in the modern bar, and the importance of coffee to modern drinking. By working with local farmers who focus on producing coffee from a single region, it allows for concentrated quality, and transparency, with no two releases being the same.

“We’re a 100% natural coffee liqueur with nothing to hide, and the Single Origin series captures the terroir of each of Mr Black’s growing region in a bottle,” said Tom Baker,  co-founder of Mr Black. “We’re thrilled for Mr Black to be supporting small-scale farmers and local communities as well as to clear a path for serious coffee lovers to access the world’s finest sustainably grown coffee, combined with our refined neutral grain spirit. Before Mr Black, coffee liqueurs were over-sweetened and full of fake, candy flavors. Our Single Origin puts real, specialty coffee on a pedestal ”

Since Mr. Black launched five years ago, the continued rise of coffee culture and craft distilling has culminated now with expertly crafted coffee cocktails being offered at the world’s best bars and restaurants. It was a natural extension to release a series that celebrates the terroir of top growing regions around the world, with the demand for single origin growing 4% in the first six months of 2019, outpacing the total premium coffee segment, according to Nielsen’s.

Every batch of single origin coffee is unique based on several environmental factors, offering a nuance of flavor that defines the different parts of the world. The first release Mr Black Single Origin coffee was selected by Mr Black’s Head of Coffee, Dr Detlef Mohr, for its exceptional character, fine balance of clean fruit notes and natural fermented flavors found in “honey” processed coffees. With a light fruit character, it represents the other side of the coffee spectrum to Mr Black Cold Brew Liquor, which is renowned for its robust dark chocolate, caramel, and citrus flavor.

The coffee for the first Single Origin Colombia was grown by Luis Aníbal Calderón and his family, who have over 60 years of experience growing coffee. For the past twelve years, the family has been specifically focusing on specialty coffee, making them the perfect partners to launch the first variation of Mr Black’s Single Origin expression.

For more information, visit mrblack.co and on social media on @mrblackspirits

Mr Black are Coffee Roasters and Craft Distillers from Sydney, Australia on a mission to bring craft coffee to the bar. Made 300 bottles at a time, Mr Black’s original Cold Brew Coffee Liquor has quickly become the coffee of choice for many of the world’s best bars and restaurants.  With half the sugar and ten times the coffee of ‘old-world’ liqueurs, Mr Black is a cold brew liquor for coffee purists. Already the number one selling Australian craft spirit in the US, Mr Black can be found in more than 4,000 accounts across the country such as The NoMad, The Aviary, and the recently voted 2019’s Best Bar in the World, Dante.