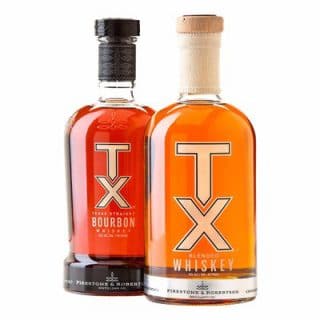 FORT WORTH, Texas— This fast-growing, high-potential brand is the latest in a series of successful deals illustrating the Group’s active portfolio management, part of its three-year strategic plan “Transform & Accelerate.”

The TX brand range includes super-premium whiskey and bourbon. TX Blended Whiskey, launched in 2012, is a smooth-drinking, award-winning brand that has already garnered a passionate following. The full TX range espouses the brand’s rugged elegance; the bottle tops are hand made from boot leather, the canvas neck wraps are a nod to pioneer covered wagons and the silver band around the base of every bottle represents a polished symbol of Western culture. With this deal, Pernod Ricard once again is expanding its portfolio to include brands with unique and comprehensive value propositions.

The deal includes Whiskey Ranch, a state-of-the-art distillery minutes from downtown Fort Worth, where consumers can enjoy the full TX brand Experience, including tours and tastings.

For Alexandre Ricard, Chairman and CEO of Pernod Ricard, “The addition of TX, which is an exceptional super premium whiskey blended by skilled Texan craftsmen, represents a very promising venture which strengthens our portfolio and footprint in the United States.”

For Paul Duffy, Chairman & CEO of Pernod Ricard North America, “The TX Blended Whiskey distinguishes itself as a brand poised for tremendous growth. The team at Firestone & Robertson Distilling Co. have done an excellent job developing the brand, and we are keen to build on this success. We will continue to reinforce the community of loyal TX brand ambassadors, both as we expand distribution and as we welcome consumers to the Whiskey Ranch.”

For Leonard Firestone and Troy Robertson, Founders of Firestone & Robertson Distilling Co., “This is an exciting day for all of us at Firestone & Robertson. Building our company and producing award-winning whiskies has been a truly remarkable experience. We are so proud of our team, and grateful to the many people that supported our efforts over the years. It is an extraordinary opportunity to partner with Pernod Ricard, and we are confident this relationship will accelerate the growth of our brands while preserving our roots and shared core values.”

Pernod Ricard is the No.2 worldwide producer of wines and spirits with consolidated sales of €8,987 million in FY18. Created in 1975 by the merger of Ricard and Pernod, the Group has developed through organic growth and acquisitions: Seagram (2001), Allied Domecq (2005) and Vin&Sprit (2008). Pernod Ricard, which owns 16 of the Top 100 Spirits Brands, holds one of the most prestigious and comprehensive brand portfolios in the industry, including: Absolut Vodka, Ricard pastis, Ballantine’s, Chivas Regal, Royal Salute, and The Glenlivet Scotch whiskies, Jameson Irish whiskey, Martell cognac, Havana Club rum, Beefeater gin, Malibu liqueur, Mumm and Perrier-Jouët champagnes, as well Jacob’s Creek, Brancott Estate, Campo Viejo, and Kenwood wines. Pernod Ricard’s brands are distributed via six Brand Companies through 86 direct affiliates across five continents. The Group’s decentralised organisation empowers its 19,000 employees to be true on-the-ground ambassadors of its vision of “Créateurs de Convivialité.” As reaffirmed by the Group’s three-year strategic plan, “Transform and Accelerate,” deployed in 2018, Pernod Ricard’s strategy focuses on investing in long-term, profitable growth for all stakeholders. The Group remains true to its three founding values: entrepreneurial spirit, mutual trust, and a strong sense of ethics. As illustrated by the 2030 roadmap supporting the United Nations Sustainable Development Goals (SDGs), “We bring good times from a good place.” In recognition of Pernod Ricard’s strong commitment to sustainable development and responsible consumption, it has received a Gold rating from Ecovadis and is ranked No. 1 in the beverage sector in Vigeo Eiris. Pernod Ricard is also a United Nation’s Global Compact LEAD company.

Firestone & Robertson Distilling Co (F&R): Established in 2010 by Leonard Firestone and Troy Robertson, F&R is a premier artisanal whiskey distillery located in Fort Worth, Texas, crafting TX Whiskey and TX Straight Bourbon. TX Whiskey was released in 2012 and quickly became renowned for its exceptionally smooth and flavorful taste, winning “Double Gold” and “Best American Craft Whiskey” honors at the San Francisco World Spirits Competition. The brand has become wildly popular throughout a growing number of states across the country not only for its taste but also for the handmade bottle tops adorned with leather the company sources from local cowboy boot makers. Distilled and aged in the North Texas climate for approximately five years, TX Straight Bourbon gained industry notoriety for its Texas provenance by utilizing Texas grown corn and wheat, and a proprietary yeast captured from a Texas pecan nut. TX Straight Bourbon is the only bourbon in the world to utilize a wild Texas yeast strain, and is also award winning, securing a silver medal in the 2017 San Francisco competition. For more information, please visit frdistilling.com.