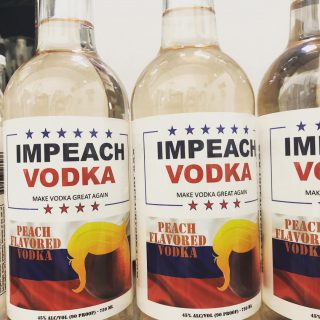 GOLDEN, Colo.– Local craft distillery State 38 Distilling has released a new vodka that is inciting impassioned responses from both sides of the aisle. Impeach Vodka is made with real peach puree to imbue a rich fruity flavor to the smooth vodka spirit. The over-the-top satirical label features a cartoon peach sporting a recognizable comb-over wig placed, non-coincidentally, in front of a Russian flag alongside the slogan, “Make Vodka Great Again.”

“Look out, Colorado! Impeach Vodka is coming to a liquor store near you. But not the s—hole ones,” proclaimed the humorous brand’s viral first Facebook post, ribbing on real quotes from the commander-in-chief. “Grab a bottle and enjoy the bigly peach flavor. It’s the peachiest. Nothing is peachier than this vodka. Everybody has said how great it is at being peach.”

The ABV (alcohol by volume) for Impeach Vodka is 45 percent— an unusually high proof for vodka, which is typically filtered to 40 percent ABV. The number 45 is another comical dig at the bottle’s muse. Creative cocktail recipes featured on Impeach Vodka’s website include The Moron Lago, Moscow Ass, Peach Russian and the Stormy Daniels.

As of today, more than 90 retail locations in Colorado are selling Impeach Vodka, with dozens more stocking it weekly. Impeach Vodka is also available nationwide on Cellar.com for $26.99, where legal to ship.

Based in beautiful Golden, Colorado, State 38 Distilling is a boutique distillery hand-built with extreme attention to detail and in celebration of the birth year of Colorado, 1876.