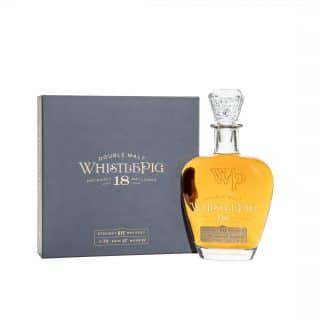 SHOREHAM, Vt.— WhistlePig, the no. 1 distiller in the fast growing, ultra-premium and luxury rye whiskey category, introduces their oldest whiskey to date, WhistlePig Double Malt Rye – Aged 18 Years.  The 18 year old whiskey is distilled from a mashbill that includes both malted rye and malted barley. With Double Malt Rye, the award-winning company shifts their innovationlens to fermentation and distillation, while previous releases such as the Old World Rye – Aged 12 Years, Estate Oak Rye – Aged 15 Years, and The Boss Bog, focus on maturation.  A limited allocation of this rare whiskey will be released each year.

WhistlePig Double MaltRye is hand bottled on site at WhistlePig’s distillery, located at the company’s remote 500-acre farm in bucolic Shoreham,Vermont.  The ideal place to perfect experiments in blending and finishing, WhistlePig has released a portfolio of deeply complex rye whiskeys since it was founded in 2008, driven by Dave Pickerell’s passion for innovation and extended maturation to unlock the full potential of rye.  WhistlePig Double Malt Rye – Aged 18 Years continues this legacy, as one of the oldest rye whiskeys available today, created from an unconventional mash bill.

This rare release is the result of a long-awaited in experiment in how grain affects flavor early in the whiskey making process, in particular the bygone practice of malting rye.  The 18 year old whiskey’s ‘Double Malt’ mash bill innovates on a traditional practice of malting a small portion of the rye harvest, as done by farmer distillers before industrial whiskey making processes were established.  This particular union of grains is not often sought out by modern distillers.

“To harness this tradition for our oldest expression of WhistlePig yet, we selected a whiskey distilled from 79% rye, 15% malted rye, and 6% malted barley,” says PeteLynch, Master Blender of WhistlePig. “These grains forma harmony that spans the flavor spectrum, at once soft and floral,rich and savory, and full of spice.  It’s complexity is only heightened after 18 years in the barrel.”

WhistlePig Double Malt Rye- Aged 18 Years is bottled in a decanter adapted from the traditional WhistlePig bottle shape, and accompanied by Vermont glass stopper, custom made for WhistlePig by Burlington based AO Glass. Each individual stopper is unique, having been pressed by hand on one of the last remaining 19th century glass pressing machines. The antique machine was rescued from a historic factory and installed at AO’s Burlington glass studio the same week WhistlePig’s second still was installed at the distillery in March 2019.

Hand bottled in the barn at 92 proof, WhistlePig Double Malt Rye -Aged 18 Years is 46% alc/vol with a suggested retail price of$399.99. Like the other WhistlePig rare offerings before it, 18 yearwill be sold at a variety of premium liquor stores, bars and restaurants across the United States and is available for pre-sale via Caskers.com.

Founded in 2008, WhistlePig is the premieraged rye whiskey, featuring the bold and often untapped flavor of rye.WhistlePig is leading a surge of innovation in the emerging field of NorthAmerican whiskey. As the most decorated rye whiskey – having received thecoveted ‘Best in Show Whiskey’ title from the 2017 San Francisco World SpiritsCompetition, WhistlePig is widely viewed as the world’s finest Rye. With theopening of its distillery on its 500-acre Vermont farm in the fall of 2015,WhistlePig has also become one of the leading farm-to-bottle rye whiskeys inthe world. whistlepigrye.com.