Bruce Cost Ginger Ale is a brand that has, at least in terms of their ability to develop top notch ginger based sodas, really developed into one of the preeminent craft soda brands that’s on the market today. They’ve developed a suite of different ginger ale offerings, all of which are unfiltered and really put the spotlight on their use of whole ginger root rather than extract. 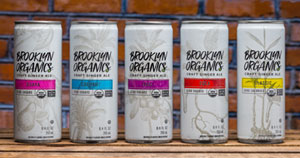 That being said, we were admittedly somewhat surprised to find out that Bruce Cost Ginger Ale is the company behind Brooklyn Organics. The product offering has a variety of attributes that are a departure from their core brand, including not using the Bruce Cost name, being zero calorie, using ginger extract, and being USDA Organic and Non-GMO Project verified.

The flavor offerings, which include Classic, Coconut, Guava, Acai, and Cola, venture into some pretty unique flavor profiles. Starting with the Classic, which is presumably somewhat of a base for the other varieties, we taste something that’s more or less what we’d expect from a diet ginger ale. It’s clear in color, has a ginger flavor that is relatively lacking in the spice department, and some traces of stevia at the finish.

From there, we moved on to Cola, which is the only other classic soda flavor to make it into the line. Blending cola and ginger ale flavors actually works better than we expected, especially in that it seems to do a pretty good job of masking the stevia.

Lastly, there’s Coconut, Guava, and Acai. These three products are really forward with their use of flavorings, which ultimately detracts from their ability to deliver good ginger ale flavor. Plus, we feel as though some of these combinations are really stretching it on the marketability and complexity front. How many consumers are going to pick a zero calorie guava flavored ginger ale? We’d bet that this brand would be better off if they infused more traditional soda flavors.

Beyond that, we can’t help but wonder why they didn’t focus their efforts on developing a zero-calorie brand under the Bruce Cost banner. The branding of this product feels somewhat sterile, which is quite a stark contrast to the small batch vibe of Bruce Cost Ginger Ale. But if this is the course they want to pursue, we think they need to figure out how to inject some personality and pop into this brand. We honestly might mistake the current version for a store brand.

Overall, we really like the idea of a zero-calorie offering from Bruce Cost Ginger Ale. However, what we see in the form of Brooklyn Organics is something that feels a little rough out of the gate.