Since its launch a few years ago, Mansi has offered only a single product: a calamansi juice drink. This year, the company has introduced a second SKU called Calamansi Iced Tea. 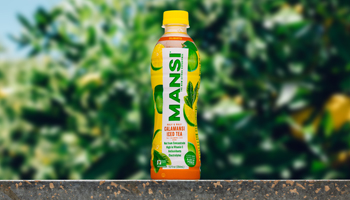 This product is, as the label calls out, Mansi’s take on the “half and half” (aka Arnold Palmer), which is the classic blend of iced tea and lemonade. This version substitutes calamansi juice in place of lemonade and other key ingredients include tea, sugar, erythritol, and natural flavors. Each 12 oz bottle contains 90 calories and about 20 grams of sugar.

From a taste perspective, the company has certainly created a crowd pleaser. It is sweet and has plenty of black tea and citrus flavor. The use of calamansi juice (10%) instead of lemonade works well and, if there’s any difference, it’s a bit less sharp than its traditional counterpart. The product clearly uses a decent amount of sugar, but we were still impressed that there was no flavor from the erythritol.

Similarly to its Original SKU, Calamansi Iced Tea is packaged is a 12 oz PET bottle that is yellow with a white rectangular strip down the middle. There’s a callout around the top of the bottle for “Calamantea” and you’ll also find text at the bottom that says “Half & Half” and “Calamansi Iced Tea.” Despite the three callouts, none of these seem overly prominent, so we think there’s a bit of work left to do.

To some extent, we feel the same way about the overall branding. “Mansi” feels like something that is an ingredient play, both in the literal name and in the label’s efforts to educate the consumer about calamansi. As a result, we think the branding still needs to be strengthened to better connect with consumers.

Overall, this is definitely a good line extension for Mansi. It not only gives the company a much needed second SKU, it also creates something that we think will be the entry point for consumers who are new to calamansi. There’s still some work to do in developing the brand, but this is a nice step forward in Mansi’s evolution.