Tsamma is a ready to drink juice beverage from Frey Farms, which is self-described as one of the country’s largest watermelon growers. The product, which we first took a look at back in 2014, has been given a bit of an update. 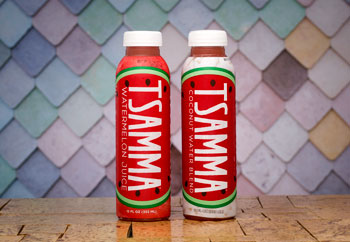 Now, in September of 2017, the company has re-released the product with two flavors, Watermelon Juice and Coconut Water Blend, both of which are packaged in a round 12 oz. plastic bottle.

The products are still cold-pressed but are also pasteurized (low energy pasteurization, according to the label) and feature formulations that are labeled as 100% juice. The ingredient lists are short, with watermelon juice and coconut water (in the case of Coconut Water Blend) along with acidifiers and natural flavors.

The flavor profiles of both of the products are simple and clean, with the juices really speaking for themselves. Both are quite heavy on the watermelon flavor, although the addition of coconut water in the Coconut Water Blend helps mellow it out. And with around 90 calories and 19g of sugar per bottle the two products are largely the same from a nutritional perspective. All in all, both of these formulations are tasty and enjoyable and we don’t see any real impact to the flavor from the use of pasteurization.

Packaging is where the brand still needs improvement. While we like the shift to a 12 oz. round bottle, the labels aren’t quite there. The first issue we have is with the differentiation between the two flavors -- you have to really look to see which is which.. The flavor name is written vertically in rather thin text and is placed among a sea of other things that are on the label clamoring for your attention. This leads us to the second issue, which is the messaging. The product is trying to be a “performance hydration” product, but this message is distracting and raises more questions (such as “what’s in this stuff?”) than anything.

What we’d suggest is simplifying. At its core, the brand seems to be a product that is about less -- in terms of processing -- rather than more. Making the package cleaner and the message more succinct and focused would go a long way in our opinion.

Overall, Tsamma has definitely created some nice tasting liquid and, if the packaging is refined, we think that the brand should have some room to run.