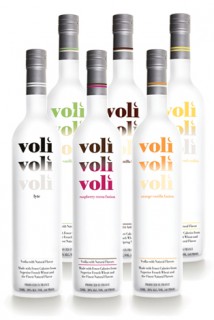 MIAMI – June 3, 2014 – Signature cocktails made with Voli Vodka, the award-winning spirit hand-crafted in France, will be offered on the new fleet-wide cocktail menu on Norwegian Cruise Line.  The cocktails will be available onboard all of the line’s ships and were chosen by international recording star Pitbull (Armando Christian Perez), major equity owner and official ambassador for the Voli brand.  Earlier this spring Pitbull performed during the christening of the new Norwegian Getaway in Miami.  Norwegian Getaway is the largest ship to homeport year-round in Miami and features a multitude of Miami-inspired venues and offerings, providing the perfect venue for Pitbull, one of the city’s iconic performers.

At the christening of the new ship, Pitbull introduced his signature Voli brand to cruise goers aboard Norwegian Getaway for the first time.  Voli – Vodka with Natural Flavors – will be showcased in two signature drinks:  Pitbull’s personal favorite, the Volito, his take on the classic mojito, and the 305 Cosmo.  The hand-crafted, superb French spirit brings to life the slogan “Turn Up The Voli.” Norwegian Getaway sails year-round from Miami, departing every Saturday to the Eastern Caribbean.

“We are excited to offer Voli onboard our ships,” said Kevin Sheehan, CEO of Norwegian Cruise Line.  “As a company that is all about offering freedom, flexibility and choice aboard our ships, the new cocktails made with Voli are a great way for our guests to experience something new adding to their great cruise experience.”

Five times distilled, four times filtered, Voli is a perfectly balanced spirit.  Made from the highest-quality French wheat and natural spring water originating from the Massif-Central Mountains.  Available in Original as well as Lemon, Espresso-Vanilla, Raspberry-Cocoa, Mango-Coconut and Orange-Vanilla flavors, the brand has received multiple awards including Gold and Double Gold from the San Francisco Spirits Competition.

Juice of half a lime

Serve over ice and stir.

Shake and strain into a chilled Martini glass.

Voli – Vodka and natural flavors is an award winning spirit hand-crafted in Cognac, France.  Voli is made from a delicate blend of the finest multi-distilled wheat vodka, natural spring water and infused high-quality natural flavors.  Voli Vodka is available in Original and the following flavors-Lemon, Orange Vanilla, Mango Coconut, Raspberry Cocoa and Espresso Vanilla.  Pitbull [Armando Christian Perez], the internationally renowned recording artist has taken the brand worldwide, as a major equity owner and official ambassador for Voli. With Pitbull, Voli reaches the global market like no other brand.  Voli Original and all flavors retail at approximately $19.99 for a 750ml bottle. For more information please visit www.volivodka.com.

Armando Christian Perez aka Pitbull is a globally successful musician, performer, business entrepreneur, fashion icon and actor whose career sales have exceeded 5 million albums and over 60 million singles worldwide. Pitbull has had #1 hits in more than 15 countries, his videos have over 5 billion views, and his social reach matches audiences of some television networks around the world. Pitbull’s latest album, Global Warming: Meltdown features the massive hit singles “Feel This Moment” with Christina Aguilera, “Don’t Stop The Party,” “Back In Time” from the action-comedy Men in Black 3, along with his second #1 hit on the Billboard Hot 100 chart “Timber” featuring Ke$ha. Pitbull’s world tours have sold out concerts in North and South America, Europe, and the Far East. He recently confirmed a fall co-headline U.S./Canada arena tour with Enrique Iglesias. This year, Pitbull was selected to perform the official anthem “We Are One (Ole Ola)” at the opening ceremony of the FIFA World Cup in Sao Paolo, Brazil. Armando is also a burgeoning business entrepreneur with his own line of premium, vodkas (Voli), a partnership with Sheets, the dissolvable energy strip, as well as premier fragrances for men and women simply titled Pitbull. These ventures along with major sponsorship deals with blue-chip brands like Bud Light, Dr Pepper, Kodak, and Dodge, plus a television production deal announced with Endemol North America where they announced his own New Year’s Eve special on Fox, and a strategic partnership with Playboy Enterprises that was unveiled in the music video for his new global smash hit “Wild Wild Love” featuring G.R.L clearly define Pitbull as Mr. Worldwide.

Norwegian Cruise Line is the innovator in cruise travel with a 47-year history of breaking the boundaries of traditional cruising, most notably with the introduction of Freestyle Cruising which revolutionized the industry by giving guests more freedom and flexibility. Today, Norwegian invites guests to “Cruise Like a Norwegian” on one of 13 purpose-built Freestyle Cruising ships, providing guests the opportunity to enjoy a relaxed, resort style cruise vacation on some of the newest and most contemporary ships at sea. Recently, the line was named “Europe’s Leading Cruise Line” for the sixth consecutive year, as well as “Caribbean’s Leading Cruise Line” and “World’s Leading Large Ship Cruise Line” by the World Travel Awards.

The Company recently took delivery of its most innovative ship to date, the 4,000-passenger Norwegian Getaway on January 10, 2014.  The largest ship to homeport year-round in Miami, Norwegian Getaway boasts 28 dining options, including seafood restaurant Ocean Blue by famed New York Iron Chef Geoffrey Zakarian and a branch of Carlo’s Bake Shop by Buddy Valastro, star of the TLC series “Cake Boss.”  The entertainment lineup includes Broadway shows Legally Blonde and Burn the Floor and a unique magical theatrical experience, the Illusionarium.  Norwegian Getaway’s sister ship, Norwegian Breakaway, was named “Best New Ship of 2013” by the editors of Cruise Critic and “Best Rookie Cruise Ship” by the readers of Travel Weekly.  Known as New York’s ship, Norwegian Breakaway is the largest vessel to homeport year-round in the city.  The Company has two 4,200-passenger vessels on order at Meyer Werft: Norwegian Escape with delivery scheduled in October 2015; and Norwegian Bliss with delivery in the February 2017.