Hallock, Minn. – Far North Spirits, the northernmost craft distillery in the contiguous U.S., has expanded its distribution network into the California market on the heels of a notable 2016 Good Food Award for its Gustaf Navy Strength gin. Far North’s California distribution partner is T. Edward Wines, who also distributes its products throughout New York and New Jersey. Far North is now available in eight states.

Among then was Minnesota’s Far North Spirits. Named for the distiller’s great grandpa who started the family farm almost 100 years ago, Gustaf Navy Strength Gin is made from estate farmed, non-GMO AC Hazlet Winter Rye planted and harvested by head distiller Michael Swanson on the family farm. Every step of production for this farm-to-bottle gin is done by hand. “Gustaf was a stoic, stubborn Swede who insisted that anything worth doing was worth doing well,” noted Swanson. “He had a powerful bearing, and I thought a navy strength gin would live up to his namesake.” 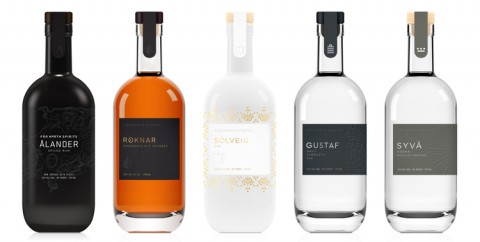 Good Food Award winners hail from 33 states, having risen to the top amongst 1,937 entries in a Blind Tasting with 203 judges held in September. The highest scoring entries were submitted to a rigorous vetting process to verify they met the sustainability and social responsibility criteria to win a Good Food Awards – with over two dozen ultimately disqualified. This year’s winners represent the forefront of American craft food, making products that are delicious, respectful of the environment, and connected to communities and cultural traditions. As Good Food Awards Founder Sarah Weiner noted in her closing remarks: “Twenty years ago, it took travelling across the globe to encounter something so exquisite that it jolted me into seeing the world with new eyes. Now, you are giving people a taste of how good life can be right here on our own soil…changing America’s definition of Good Food.”

About Far North Spirits Minnesota’s Far North Spirits, located in Minnesota’s Red River Valley just 20 miles from the Canadian border, is one of a handful of authentic field-to-glass estate producers of small-batch, craft-distilled spirits. Inspired by a heritage of independence, hardihood and agricultural abundance, founding partners Michael Swanson and Cheri Reese fled the corporate world to Michael’s 100-year old, fourth-generation family farm. There Michael hand selects, plants and harvests all non-GMO grains; he also mills, mashes, ferments, distills and bottles their whiskey, gins, rum and vodka. The exhilarating, evangelical goal at Far North Spirits is to make Minnesota a leader in the production of rye grain and world class rye Whiskey. Their gins, rum and vodka are certified Kosher. More at www.farnorthspirits.com

About the Good Food Awards The Good Food Awards celebrates the kind of food everyone wants to eat: tasty, authentic and responsibly produced. They grant awards to outstanding American food producers and the farmers who provide their ingredients. Seedling Projects 501 (c) 3 organizes the Awards in collaboration with a broad community of food producers, food writers and passionate food-lovers. Find more information at: seedlingprojects.org and goodfoodawards.org.

The full list of 2016 Good Food Award winners can be found here.