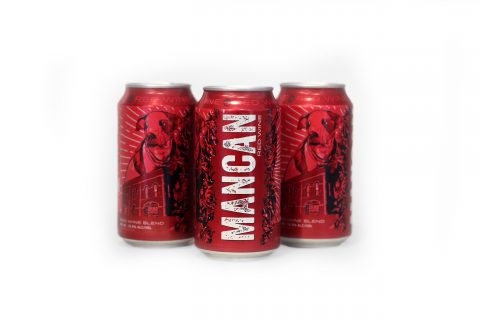 This support for a local company is consistent with the Browns’ commitment to Northeast Ohio and is a way the team is supporting the entrepreneurial ecosystem in its hometown. MANCAN’s current portfolio includes a Rosé, Red, White, and Fizz (the company’s semi-sparkling wine). All MANCAN wine cans are specially lined to lock in the flavor profiles and prevent any metallic taste.

The Browns will market MANCAN across their television and radio platforms as well as with co-branded koozie giveaways and placement on the exterior videoboard at FirstEnergy Stadium and the interior monitors and LED sideline boards.

“This is a huge moment for a lifelong Cleveland fan like myself to have the Browns as a partner, and the ability to educate attendees about our awesome-wine-in-a-can, people now have a great way to enjoy award winning wine at the game or a concert,” said MANCAN Head Wine Guy, Graham Veysey.

“We are proud to partner with another Cleveland-based company as it continues to grow in the region and nationwide,” said Browns Executive Vice President/Chief Operating Officer Dave Jenkins. “We also greatly respect how Graham and Fisk have developed MANCAN as a business and their vision for the company as entrepreneurs.”

MANCAN is available across the U.S. (CA, OH, MI, TX, DE, MD, FL, VA, MA, CO, GA, MN, OR, WA, NV, DC, and NJ) at key retailers including Whole Foods Market and Total Wine and More. In addition to FirstEnergy Stadium and Blossom Music Center, MANCAN is available at Progressive Field, Little Cesar Arena in Detroit, National Park in Washington, D.C., the House of Blues and other venues and retails.

MANCAN Wine was founded in 2015 as the first-exclusive-wine-in-a-can company by Graham Veysey and Fisk Biggar, childhood friends who have been pals for over 25 years. MANCAN sources great California grapes for its specially-designed blends and is headquartered in a firehouse that was built in 1854 which still has three poles. For more information, visit www.mancanwine.com.

About the Cleveland Browns

A member of the National Football League’s AFC North division, the Cleveland Browns have long been among the most iconic and historic professional football clubs. Bolstered by eight league titles, 13 division championships and 16 Pro Football Hall of Famers, the Browns were established in 1945 as a charter team of the All-America Football Conference (AAFC). The Browns played their inaugural season in 1946 and finished in first place during each of the league’s four years of existence (1946-49). Cleveland was one of three AAFC teams selected to merge with the NFL in 1950 and appeared in the league’s title game in each of its first seven seasons, claiming three of its four NFL championships overall (1950; 1954-55; 1964) during that stretch. The Browns’ 16 Pro Football Hall of Famers, the sixth-most in the NFL, include founder Paul Brown, legends Jim Brown, Otto Graham and Lou Groza, as well as Marion Motley and Bill Willis, two of the first African-Americans to help break professional sports’ race barrier in 1946. After a relocation to Baltimore in 1995, Cleveland was awarded an expansion franchise that returned to play in 1999, retaining all of the club’s history and its namesake. In 2012, Dee and Jimmy Haslam, CEO of Pilot Flying J, purchased a controlling interest of the Cleveland Browns. Their vision for the Browns is to build a consistently winning football team, to take exceptional care of Browns fans and to be leaders in the Northeast Ohio community through the core areas of education, youth football the team’s signature First and Ten volunteering movement. The Browns, led by Head Coach Hue Jackson and General Manager John Dorsey, play their home games at FirstEnergy Stadium in Downtown Cleveland.