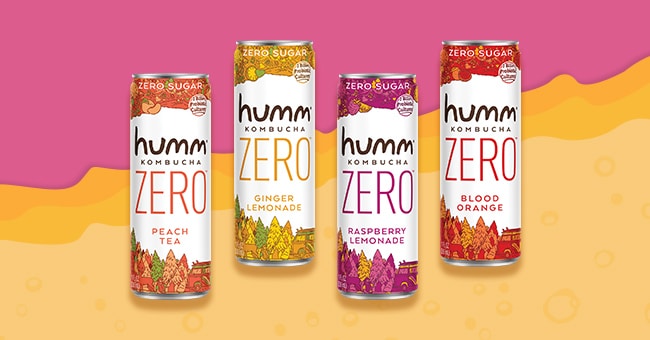 Sugar is an essential ingredient in brewing kombucha, but that doesn’t mean consumers have to drink it.

That’s the proposition behind Humm Zero, the new sugar-free line from the Oregon-based kombucha brand that’s set to launch in select markets and on Amazon in April. The product will be sold in 11 oz. single-serve cans ($2.99 SRP) and 4-packs ($9.99) in four flavors: Peach Tea, Blood Orange, Ginger Lemonade and Raspberry Lemonade.

The key to eliminating the sugar is that it doesn’t take place during fermentation, but through the flavors and sweeteners that are added at the end. There’s still no way to make kombucha without using sugar, which acts as food for the yeast culture and causes the tea base to ferment. For all of its products, Humm allows its base brew to ferment until all the sugar has been consumed. Those brews are then sweetened with organic fruits and juices, reintroducing sugars which the active yeast can feed on and turn into alcohol, thus requiring the product to remain refrigerated. The new line simply takes that same base non-alcoholic kombucha and adds plant-based sweeteners — including monk fruit and allulose, among others — and organic flavors instead.

The result is a kombucha that has 10 calories and no sugar, but that is also not from concentrate and that is shelf-stable without pasteurization as well. Though it has been present in Humm’s kombucha for years, Humm Zero will additionally feature the brand’s first on-package callout for 33 mcg of added vitamin B12.

“This is all what we’ve been doing over the past couple of years, developing this proprietary brewing process called FIP (Fermentation Innovation Process) which enables us to do a lot of stuff, including Humm Zero,” said Humm president Matt Witherell, who joined the company in August.

According to Humm CEO and co-founder Jamie Danek, with its brewing process already set, Humm’s challenge was to create captivating flavors without sugar.

“This is where we’ve been a couple years in the making on this one,” she said. “It’s really tricky to make something taste great that doesn’t have any sugar. So that’s the thing where we have some pretty badass R&D people at Humm and we are driven to make something absurdly tasty.”

Along with alcohol content, sugar has been one of the primary sources of controversy within the kombucha business for about a decade. Humm was one of a half-dozen kombucha makers — including GT’s Living Foods, Health Ade, The BU, Better Booch, Rowdy Mermaid and Trader Joe’s — named in separate complaints filed in California by Tortilla Factory, the parent company of Kombucha Dog; in the case involving Humm, the plaintiff’s claims related to sugar content were dismissed for lack of factual evidence in September 2018.

Danek said, however, that marketing and packaging copy for Humm Zero will not feature a detailed breakdown of how sugar is used and then removed from the product.

“People who don’t know about kombucha have no idea if you brew it with sugar or if you don’t, or about pasteurized or any of that stuff,” she said. “So for the consumer that has no idea, we’re not going to confuse them with a bunch of information that they already don’t know. We’re going to talk to them about B-12, about probiotics, about a bubbly fermented product. For our messaging to the industry, it will be very clear that how we make our kombucha is just like making traditional kombucha; however, we brew all the sugar out.”

Danek noted that, in contrast to the larger category, Humm has been a mass retail brand from the beginning, picking up distribution in stores like Walmart, Costco and Target long before entering Whole Foods. Creating a product that addresses consumers’ desire for less sugar is an extension of that mainstream philosophy, Danek said. The company’s prior innovations — such as its reduced sugar SKUs (5 grams) and 12 oz. aluminum cans — have also helped position it to expand within the fast-growing convenience and MULO channels, the latter of which represented a 70% share of the kombucha category in 2019 according to SPINS.

“It’s such a natural progression for the brand to go outside the box and to think about what’s happening in the whole world versus just in our own little natural category,” she said. “And therefore creating a product that addresses big things in the world and all the consumers, versus just the natural consumer or just the kombucha consumer, it’s such a natural progression. It’s another extension of how we express ourselves.”