Despite this week’s sudden postponement of one of the year’s biggest industry trade shows, BevNET has still got you covered for the latest news and stories from around the beverage world. In the next edition in a series of news briefs, we catch up with Vive Organic to discuss a pair of new additions to its line of functional cold-pressed juice shots, while also checking out new plant-based innovations from teaRIOT and Protein2o. 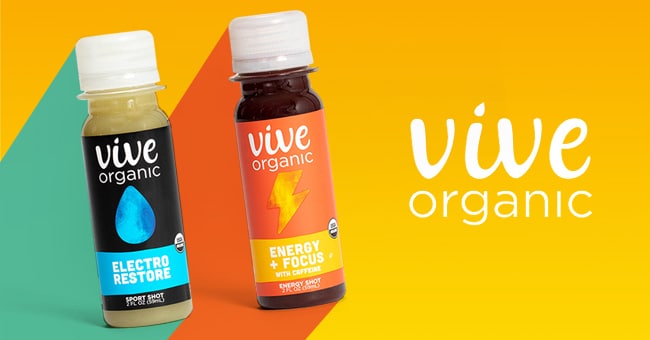 The California-based brand has helped turn its refrigerated 2 oz. juice shots from a niche health and wellness play into a national premium brand with multi-channel distribution. Leaning into current consumer interest in natural functional products, Vive’s lineup, minus the new flavors, consists of five SKUS — Wellness Rescue, Immunity Boost (three varieties) and Antioxidant Detox — each retailing for $3.99 per bottle.

Both of the new varieties extend Vive into new use occasions and functional categories. Energy + Focus offers a blend of caffeine from green tea extract and natural nootropics — such as lion’s mane (200 mg) and ashwagandha (250 mg) — finished off with turmeric, ginger, lemon juice and blueberry juice. Meanwhile, Electro Restore’s electrolyte-rich formula — made with ginseng, blue spirulina, hibernian kelp, pink Himalayan sea salt, and ginger root — is aimed at post-workout recovery.

“We looked at understanding who our core consumer is, and we learned that they are very creative, very ambitious and health conscious. They love to be in the driver seat of their own destiny, which includes their wellness journey,” said Meghann Seidner, Vive’s chief marketing officer. “Given who these folks are, we wanted to explore some tried and true areas where there are limited options for fresh alternatives.”

The new flavors are available now on Vive’s website and on Amazon, as well as at Whole Foods SoPac locations and retailers in Southern California, with a nationwide launch to follow. While natural retail has proven to be a potent launchpad for Vive’s growth, Seidner noted that the company’s strong performance in conventional and mass retail indicates the brand’s offering of fresh, efficacious functional shots is resonating with a growing set of consumers. Seidner cited SPINS data indicating that functional/wellness shots are delivering 45% of the dollar growth in the functional beverage category, while noting that Vive has multiple items amongst the top 10 highest velocity SKUs in dollars per store per week at Albertsons, Giant-Eagle and Stop & Shop.

“Our sales data is indicating that even though I’m talking about this consumer that is very at the center of the bullseye in terms of health consciousness, we’re seeing that it’s not only resonating with these folks but attracting a wider target as well,” said Seidner. “It’s not only in the natural food channel or in Los Angeles and New York; Vive is really proving out in the middle of the country and in mass channels that don’t typically adopt wellness trends as quickly as other markets.”

As younger consumers in particular have come to expect from wellness-driven brands, sustainability is also a focus for Vive moving forward. The company’s aim is to “integrate sustainability into everything we do,” said Seidner, which includes continuing to source from ‘ugly’ produce and transitioning to 100% recycled plastic bottles. 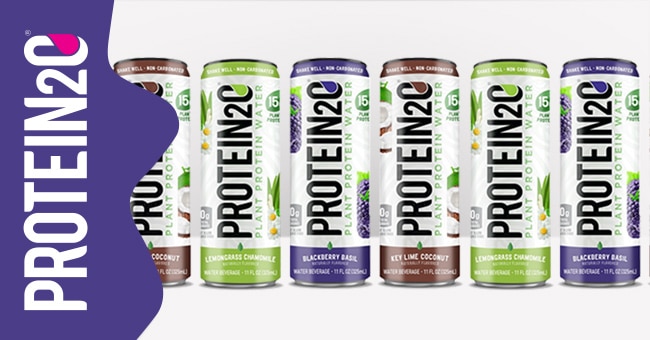 Seeking to build on the growing trend for plant-based beverages, enhanced water maker Protein2o announced this week its first vegan offering, a line of Plant-Protein Waters.

The new products — available in Blackberry Basil, Key Lime Coconut and Lemongrass Chamomile — contain 15 grams of pea protein isolate and 80 calories per 11 oz. can. The line will retail for $2.99 per unit, a slight price increase over its core line of whey protein based beverages due to higher production costs.

According to Protein2o president Andy Horrow, the product had been in development for months, but the company had previously struggled to create a stable formulation that tasted good. Horrow added that the line extension comes as the brand transitions to all natural product formulations, which includes removing artificial sweeteners such as sucralose and synthetic dyes and ingredients from its core line.

“There is definitely a growing vegan movement, so to some degree we’re answering a need there,” Horrow said. “But there’s also a growing number of people who are flexitarians who have no problem consuming meat or dairy, but want to flex into more plant-based items. As such as we’re a supplemental product for people, creating a plant-based option opened the door for us to more consumers and more occasions.”

In addition to the plant-based line, Protein2o will also enter Costco stores nationwide with an exclusive Strawberry Watermelon SKU containing electrolytes and 20 grams of whey protein. The new product will be available in 16.9 oz. bottles and will be available in 12-unit multipacks. According to Horrow, the new product was developed at the request of Costco, who were seeking a product with higher protein content (all other Protein2o products contain 15 grams of protein).

“No brand can ignore the power of Costco at retail,” Horrow said. “They build brands and they’re on pace with consumer trends. We have a really deep history of working in club with Sam’s Club, so we know the power that club can deliver. Any club accounts, whether Costco or Sam’s, they’re going to outsize any other retailer that we sell in.” 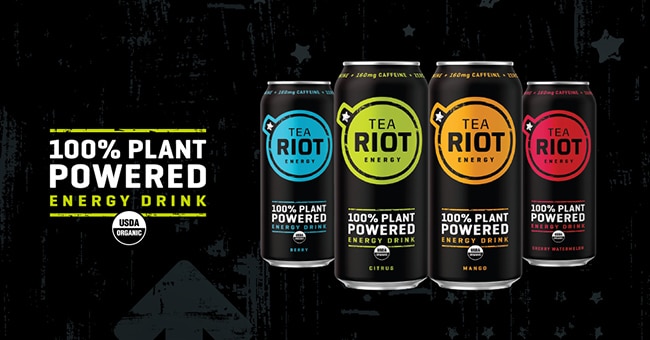 Founded in 2016, teaRIOT produces a line of bottled still teas with caffeine, L-theanine and botanicals which are available in about 1,200 stores nationwide. The new line, however, represents a repositioning for the brand into the energy drink category with carbonation, higher caffeine content (160 mg), 100 mg of L-Theanine and added B vitamins. While the company will continue to produce its older product line for existing accounts, teaRIOT founder Laura Jakobsen said that going forward the company will focus solely on the new products.

The line includes Berry, Cherry Watermelon, Citrus and Mango flavors and will retail for $2.99 per unit, a reduced price from the brand’s previous line. Each SKU contains no added sugar but is lightly sweetened with fruit juice.

“It really came from listening to our customer and responding to what they wanted to see from the brand,” Jakobsen said. “We realize we’re now positioning against a mature market of energy drinks, as opposed to being an innovative tea beverage.”

Last year, teaRIOT raised $3 million in a Series A funding round aimed at growing the brand’s retail footprint and ecommerce business. The new line will be available in Whole Foods Market stores beginning in April and is currently available for online pre-order from the company’s website.