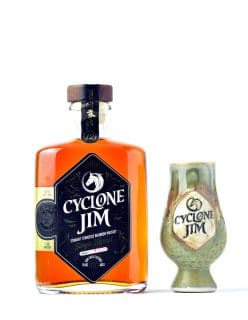 PIGEON FORGE, Tenn. – Old Forge Distillery has released a limited edition, 12-year-old, single barrel Tennessee Bourbon. Cyclone Jim Tennessee Bourbon combines classic bourbon flavor with attributes that will make it highly sought after by devoted whiskey fans. It is named in honor of a hardworking, historic resident of the distillery’s hometown of Pigeon Forge, Tennessee, who just happened to be a horse.

Cyclone Jim Tennessee Bourbon is distilled from the finest ingredients and aged for a full 12 years in new charred oak barrels. The extensive aging process is six times longer than the minimum two-year aging process required for a product labeled straight bourbon. The result is a rich, deeply amber whiskey with a delightfully complex combination of highly desirable flavors, including toffee, caramel, vanilla, and oak. Single-barrel selection ensures only the best barrels of product are chosen, with no blending.

Long-term aging also creates a significant reduction in the amount of whiskey produced, as added years of evaporation reduce the amount of product that emerges from each barrel. “Describing Cyclone Jim as a limited edition isn’t marketing hype,” says Old Forge Head Distiller Keener Shanton. “You simply can’t age a whiskey that long without nature shrinking the supply. But the taste makes it all worthwhile!”

In order to preserve its hard-won flavors, Cyclone Jim is non-chill filtered. “Chilling a whiskey during the filtering process can increase efficiency, but can also alter the flavor by removing natural proteins and fatty acids,” Head Distiller Shanton explains.

In a nod to hometown history, the new offering is named after the horse who powered the clay grinding mill for Pigeon Forge’s original pottery enterprise, now known as Pigeon River Pottery. The beloved Cyclone Jim was in charge of cleaning the freshly harvested clay taken from the Pigeon River. As Cyclone Jim’s popularity spread, he and the pottery store became the first tourist attraction in Pigeon Forge. After Cyclone Jim retired, every horse that took on the job took his name. “I thought it was a great name for a single-barrel bourbon,” Shanton says, “Because every bottle is a signature expression of a great spirit.”

In recognition of the history of Cyclone Jim and the town’s first tourist attraction, each bottle is specially packaged with a stoneware snifter handmade from Pigeon River Pottery. Each snifter has a specific glaze that corresponds to the specific barrel the amber liquid came from. Cyclone Jim is available exclusively at Old Forge Distillery.