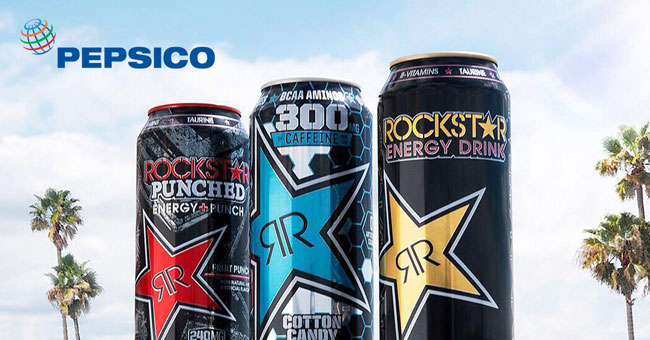 PepsiCo announced today an agreement to acquire energy drink brand Rockstar for $3.85 billion, a move that puts the food and beverage giant in position to compete with its rivals head-on for dominance in the rapidly growing energy set.

“As we work to be more consumer-centric and capitalize on rising demand in the functional beverage space, this highly strategic acquisition will enable us to leverage PepsiCo’s capabilities to both accelerate Rockstar’s performance and unlock our ability to expand in the category with existing brands such as Mountain Dew,” said PepsiCo chairman and CEO Ramon Laguarta in a press release. “Over time, we expect to capture our fair share of this fast-growing, highly profitable category and create meaningful new partnerships in the energy space.”

The deal is Pepsi’s largest since its $3.2 billion acquisition of SodaStream International in 2018. As part of the purchase agreement, Pepsi will contribute $700 million in payments related to future tax benefits associated with the transaction, with 15 year terms. The transaction is expected to close in the first half of 2020.

Las Vegas-based Rockstar, founded in 2001 by Russ Weiner, helped pioneer the nascent U.S. energy drink market, introducing the first product in a 16 oz. can. The brand’s revenues increased an annual average of 103% from 2001 to 2007 to $405 million, according to Forbes. The company currently markets over 30 flavors in convenience and grocery retailers in over 30 countries.

Rockstar’s relationship with PepsiCo goes back over a decade, beginning when the energy drink maker left its then-current distribution partner Coca-Cola to sign a 10-year distribution agreement with Pepsi in February 2009.

“We have had a strong partnership with PepsiCo for the last decade, and I’m happy to take that to the next level and join forces as one company,” said Russ Weiner in the release. “PepsiCo shares our competitive spirit and will invest in growing our brand even further. I’m proud of what we built and how we’ve changed the game in the energy space.”

Within Pepsi’s current product portfolio, Rockstar joins a limited range of energy beverages housed under the Mountain Dew brand. MTN DEW AMP offers four flavors in 16 oz. cans, while MTN DEW Kickstart is a caffeine-added blend of juice and Mountain Dew. Finally, MTN DEW AMP GameFuel is geared towards video game enthusiasts and professional players. Through its partnership with Starbucks Coffee, Pepsi also distributes coffee energy products such as Double Shot and Triple Shot. While not defined as strictly “energy” products, other brands like sparkling water Bubly and Gatorade (Bolt24) have integrated caffeine as an optional ingredient in their offerings.

Taking on a legacy brand like Rockstar, however, gives Pepsi a firm foothold in the energy category during a disruptive period in its growth. While sales continue to increase, so has innovation, as embodied by the rise of brands such as Bang and A-Shoc and by consumer interest in ingredients like BCAAs and nootropics. Recognizing the opportunities to accelerate sales and bring new consumers into the category, Pepsi’s chief rivals Coca-Cola and Keurig Dr Pepper (KDP) have already made moves within the energy set, the former through continued innovation for Monster Energy (10.1% net sales growth in Q4 2019), particularly its emphasis on performance-focused line Reign, and the latter via its distribution partnership with A-Shoc. Coke also introduced its own branded energy drink, Coca-Cola Energy, in U.S. retailers in January and is rolling out sparkling water line AHA, which includes caffeinated SKUs, this spring.

Shelf-stable energy drink sales were up 12% ($12.5 billion) through December 2019, according to IRI data. Rockstar’s core line fell 3.6% ($199.8 million) during the period, while sales of Rockstar Pure Zero were down 9.1% ($153.9 million). Rockstar’s total share of the category is now fourth, behind Red Bull, Monster, and Bang, but it is entrenched within the Pepsi system and will allow the company more flexibility to innovate throughout the energy category, which Laguarta has stated is a company goal.

In a report on the transaction, analysts with Cowen and Company wrote that they “continue to be encouraged by PEP’s approach to the energy category,” calling the deal a “welcome expansion” of the Pepsi-Rockstar partnership that provides a “solid platform” to build upon. However, the report noted the company will first need to reverse negative scanner trends for Rockstar and follow through on its stated commitment to increase marketing spend for its energy products.

“We believe this deal will be complimentary to PEP’s small existing energy drink presence (principally with Amp, and certain Mountain Dew variants), which carry a combined 2.5% share (down from 3.0% year-ago),” the analysts reported.

Elsewhere, RBC Capital Markets analyst Nik Modi noted that the deal notably removes a stipulation in Rockstar’s previous agreement with Pepsi preventing the latter from working with any non-Rockstar energy products, thus allow it to become “more aggressive” in the category. “We believe today’s announcement to acquire Rockstar clears the path for PepsiCo to perhaps create a distribution agreement with Bang,” Modi wrote.