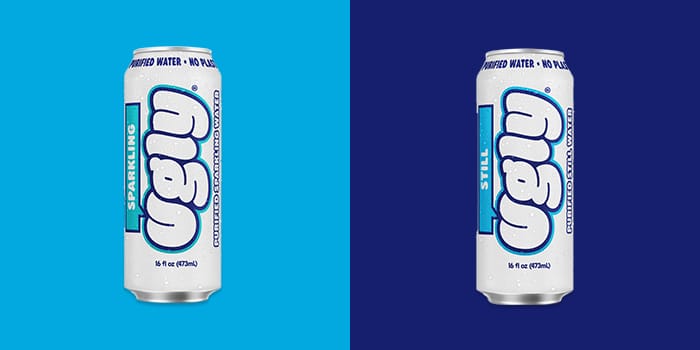 The line is available starting today direct-to-consumer via Ugly’s website, and will begin rolling out over the coming months to broadliners KeHe and UNFI as well as regional DSD partners such as Rainforest in New York City, Hensley in Arizona and Ajax Turner Co. in Tennessee. The suggested retail price for singles is 99 cents to $1.29, while 12-packs are available for $18.99.

Both still and sparkling varieties contain purified reverse osmosis water sourced from New York state. Ugly will also introduce the still water in a 330 ml can in the U.K. next month.

One cent of every can sold will go towards supporting Oceanic Global, a non-profit organization raising awareness and providing solutions related to oceanic health and sustainability. The company expects to donate over $25,000 to the group this year.

The U.K.-based company shifted up its timetable for the launch in response to the surge in demand for packaged water as the COVID-19 pandemic spreads.

“Given the environment at the moment, we are in a position where we can supply this cost-effectively and get it delivered to people’s homes and it felt like the right time to push it forward for launch,” said Ugly co-founder and CEO Hugh Thomas.

Unlike its sparkling counterpart, still water in aluminum can packaging is a relatively new development. Brands launching in the past few years such as Liquid Death, Ever & Ever, PathWater, Open Water (formerly Green Sheep) and Proud Source have focused exclusively on non-PET bottles or cans, while supporting charities such as Thirst Project, 1% For the Planet and also Oceanic Global. As plastic waste continues to rise in oceans, the movement towards alternative packaging has drawn the interest of major brands like PepsiCo and celebrity investors like actor Jason Momoa.

With the segment becoming increasingly crowded with brands vying for a younger demographic that has prioritized sustainability, Thomas noted that Ugly will be measured in how it presents its message. The brand also donates a portion of every purchase of its flavored sparkling water to Girl Up, a group focused on fighting global gender inequality.

“Everything with Ugly is about making people make better decisions in a way that feels fun, lighthearted and not too serious,” said Thomas. “What we are not doing is going very heavily after [the] sustainability angle — as we don’t do with gender equality or taking on sugar — because we want people to just make this as a simple easy decision because we think drinking sugary soda or out of plastic bottles just feels dated to us.”

With this launch, Ugly’s product range now contains flavored sparkling water in both 12 oz. and 16 oz. cans, as well as flavored energy water, still water and unflavored sparkling water in 16 oz. tallboys. Across each, Thomas noted, Ugly has positioned itself as a lifestyle-focused “water platform” that can expand incrementally into different use occasions and formats.