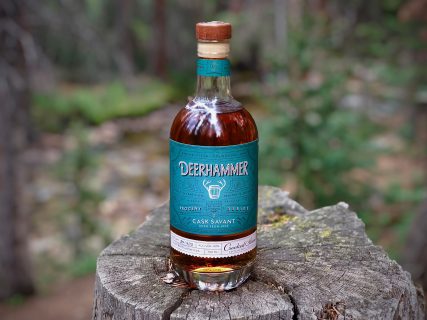 The Progeny Series is a lineup of small-batch spirits created through inspired partnerships between Deerhammer and other crafters in Colorado. Cask Savant is the second official spirit in this series coming after a whiskey and chocolate pairing with Cultura Chocolate, and an array of barrel aging projects with the likes of Wit’s End Brewing Company, Call To Arms Brewing, and Colorado Cider Company.

In 2015, Deerhammer lay Crooked Stave’s Hop Savant, a hoppy Brett beer, to rest in heavy toast light char American oak casks. The results of this 50% ABV spirit play out with notes of blackberry jam, sage brush, orange peel, hazelnut, toasted bread crust, and a spectacular interlacing of funky lupulin spice; all of which have culminated in a remarkable dram that you will not taste the likes of anywhere else.

“Getting to work with a local Colorado distillery that is truly hands-on, making their own wash, fermenting, and distilling is something I wanted to do since I started Crooked Stave. Deerhammer is that perfect partner,” adds Crooked Stave Owner and Brewmaster Chad Yakobson.“I think it’s truly amazing the time and love that went into the creation of Progeny Series No. 2 ~ Cask Savant. For Lenny and his team to devote five years to aging this wild and adventurous spirit is something unique.”

“To our knowledge this is the very first example of a spirit born from a 100% Brettanomyces yeast fermentation,” says Deerhammer Founder and Head Distiller Lenny Eckstein, “and those hallmark, rustic, funky-fruit Brett characteristics have materialized big time!”

Cask Savant is available in limited 750ML bottles at select Colorado retailers with an SRP of $69.99 while supplies last.

Deerhammer is currently aging more Progeny Series spirits in Redstone Meadery and Carboy Winery barrels, among others, that will be released in coming months to years.

For more information about Cask Savant or Deerhammer, contact Emily Hutto at hutto@radcraftbeer.com.

Steeped in Tradition. Crafted in Colorado.

Amy and Lenny Eckstein founded Deerhammer in 2010. Drawn to Buena Vista, Colorado by the whitewater currents of the Arkansas River, their passion for whiskey is driven by that same adventurous spirit. As artisans and business owners, Amy and Lenny’s process is defined by a deep curiosity for the history of spirits and a thoughtful analysis of each individual step of the distilling process. Deerhammer’s cornerstone contribution to the field of American craft spirits, Single Malt Whiskey, has become the company’s flagship product. Deerhammer also distills Whitewater Whiskey, Buena Vista Brandy, and Dutch Style Gin. Find the distillery online at deerhammer.com.

Founded in 2010, Crooked Stave is a modern, artisan brewery with a quality-driven focus. The brewery strives to blend science and art through creativity and following our passion. Located in Denver’s Sunnyside neighborhood, Crooked Stave is recognized throughout the world for complex and creative wild and sour, barrel-aged beers and a variety of traditional and innovative ales and lagers of all kinds. Crooked Stave invites beer-lovers to visit the Crooked Stave tap rooms located at the brewery, as well as in Fort Collins at The Exchange, and seek out Crooked Stave beer offerings wherever sold. For more information, follow Crooked Stave on Facebook, Instagram, and Twitter.