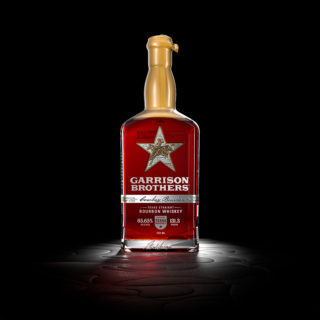 AUSTIN, TEXAS — Garrison Brothers Distillery, the first legal whiskey distillery in Texas, has released its most coveted expression, the limited-edition, highly-anticipated Cowboy Bourbon. This uncut, unfiltered, bourbon comes from barrels hand-selected by the distillery’s Master Distiller, Donnis Todd. Those barrels are then set aside for several more years for further maturation and the liquid is bottled at cask-strength — this year’s batch clocks in at a stout 131.3 proof.Cowboy Bourbon is known as the crown jewel of Garrison Brothers’ Texas bourbon family, hence the hand-dipped, gold wax seal.

Garrison Brothers produced a total of 6,440 (750ml) bottles this year, but dedicated 1,000 bottles to a drive-through distillery release event up at their ranch in Hye, Texas on September 25, 2021.  The annual event limited fans on a first come first serve basis to purchase only one bottle each and retailed for $229.99. As with past years, the line this year for the Cowboy release event with Master Distiller Donnis Todd on hand signing bottles, began the day before. All 1,000 bottles sold out in less than two hours.

5,440 bottles of Cowboy Bourbon will be distributed to liquor stores, bars, and restaurants, as well as military bases across the 42 states where Garrison Brothers is sold. Each bottle comes packaged in a custom-built solid wood gift box lined with a satin pillow and weighty medallion emblazoned with the release year around the bottle’s neck. Garrison Brothers Cowboy Bourbon will be available nationwide beginning October 15, 2021.

Jim Murray’s Whisky Bible awarded “American Micro Whiskey of the Year to Balmorhea Twice-Barreled Bourbon for 2019, 2020 and 2021. Garrison Brothers was voted Best Craft Whiskey Distillery in America by readers of USA Today in 2017.