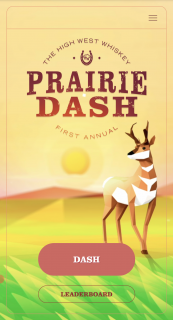 Park City, Utah — Kicking off Great Outdoors Month, High West Distillery announces the launch of Prairie Dash, a limited-time mobile game crafted in support of long-time partner and non-profit organization, American Prairie. This launch provides whiskey drinkers and gaming enthusiasts alike with a chance to give back and help conserve the natural habitat of Montana’s Great Plains in a fun, interactive way.

For every game played, High West will donate $1 to American Prairie, up to $50,000, and one lucky player will win a curated, once-in-a-lifetime, Western adventure to the distillery’s homeland, Park City, Utah. Players will compete in a collection of quick-time challenges from the perspective of a pronghorn, North America’s fastest land animal indigenous to the West. During each game, players can use their thumbs to try and reach 61 miles per hour, the speed of the pronghorn, during challenges like clearing debris and slaloming through herds of bison. In addition to competing, High West supporters can also purchase the distillery’s American Prairie Bourbon on highwest.com or through Drizly, with a portion of the proceeds donated to the bottle’s namesake organization, American Prairie.

“We are committed to celebrating and conserving the beauty and nature of the West, the place we call home. With the launch of Prairie Dash, we’re excited to bring that mission to life and provide both High West loyalists and new brand fans with a chance to take part in the efforts,” said Daniel Schear, General Manager of High West. “American Prairie is truly one of the most fantastic projects of our time, and it’s been an honor to work alongside their team to protect today’s Western habitats for future generations to come. We invite our community to join in on the movement, too, all while enjoying a little friendly competition and sipping on one of our favorites, American Prairie Bourbon.”

With a passion for the culture, heritage, and natural beauty of the American West since the brand’s inception in 2007, High West partnered with American Prairie  in 2012 to support the organization on its journey to assemble the largest nature reserve in the lower 48 states. When complete, the Reserve will be approximately 5,000 square miles; larger than Yellowstone, Yosemite and Grand Teton National Parks combined.

“We are excited about this new venture with High West and appreciative of their support of our mission all these years,” said Alison Fox, CEO of American Prairie. “Like us, they are committed to the West’s culture, heritage, and natural beauty and we’re proud to partner with this conservation-minded company.”

Available to play for the month of June only, the winner of Prairie Dash will be announced in July. One lucky winner and their travel companion will receive a personalized trip out to Park City, Utah and a chance to experience all that makes the Wild West so wonderful. For a chance to win the Prairie Dash, head here to play: race.highwest.com.

Utah’s first legal distillery since 1870, High West’s passion is crafting delicious and distinctive whiskeys and helping people appreciate whiskey all in the context of our home, the American West. High West offers an outstanding collection of highly rated whiskeys in finer liquor stores, bars, and restaurants in all 50 U.S. states and internationally.

High West was honored to receive Whisky Advocate’s prestigious Distiller of the Year award in 2016. The ultimate authority on whisky said, “High West delivers innovative and delicious whiskeys, expands the definition of what it is to be a distiller, and pioneered a successful new paradigm for craft distilling.”

High West’s must-visit locations include our High West Distillery in Wanship, Utah, a 30,000 square foot world-class distillery and visitor center featuring educational tours and High West’s unique country-western cuisine; and our High West Distillery & Saloon in historic Old Town Park City, the world’s only ski-in gastro distillery that was voted “Best Park City Restaurant” by readers of City Weekly. It has received multiple accolades including earning Best Après Ski Bar in Utah by USA TODAY’s 10Best being named a finalist in the 2020 Park City’s Best Awards for Best Après Ski, a nomination for Best Bar by the James Beard Foundation, and a top-10 ranking on The Daily Meal’s list of 150 Best Bars in America.

American Prairie’s vision is to create a vast and collaboratively-managed prairie destination that serves as a fully functioning ecosystem for wildlife, and offers visitors permanent access to the landscape that shaped our nation’s character. When complete, the Reserve will be larger than Yellowstone and Glacier National Parks combined, and will support wildlife species that historically called the Great Plains home. Already open to the public for recreation including camping and hunting, the Reserve offers visitors an opportunity to connect with nature on a truly grand scale