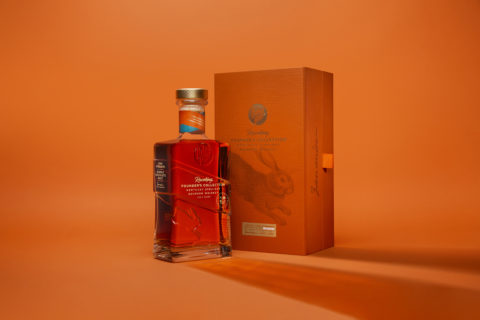 Raceking was named in honor of Kentucky’s time-honored tradition of horse racing and gives a nod to Rabbit Hole’s bold and unbridled pursuit of creativity and innovation in the American whiskey space.

With its one-of-a-kind mash bill, Raceking explores how malting organically expands the range of flavors in whiskey. Through proprietary malting processes, a chocolate wheat from Germany and a chocolate barley from the UK achieve the aromatic top notes and rich essence of chocolate. When cooked according to Rabbit Hole’s own methods and met with aging in wood-fired, toasted and charred new American Oak barrels, the flavors of the whiskey become intricately nuanced.

In keeping with the previous Founder’s Collection releases, Raceking is offered at cask strength to highlight the full potential of the double chocolate-malted grains, and their effect on the whiskey.

The genesis of Raceking came to life as Kaveh’s fascination with grains and their impact on flavor continued to grow.  For him, it became a matter of “translation.”

Kaveh said, “Malting, like whiskey, is a part art, part science.  Each malting house has standard techniques, along with individual master maltsters who bring their own creativity to the process. I tasted the chocolate grains from two malting houses, was impressed by the flavors, and immediately knew I wanted to translate those unique qualities to our whiskey. Of course, there’s always an element of uncertainty but the potential reward is worth the risk. So we made the whiskey, laid down barrels, and waited to see how it turned out I have to say four years later, it is a truly unique and simply outstanding expression. I’m especially proud with Raceking because it represents our passion for creativity and innovation, and our commitment to redefining the standard of American whiskey.”

The experience of Raceking Founder’s Collection begins as an olfactory sensation: a rush of rich cocoa rushes forward, flanked by aromas of brown sugar and toasted bread. Next comes a full field of warm, luxurious flavors, exciting the senses with hints of hazel, cinnamon spice, black cherry and tobacco. Raceking finishes strong with earthy notes of wood and leather complimented by a delicious lingering chocolate.

For the full sensory experience of Raceking Founder’s Collection, Kaveh Zamanian that recommends spirits enthusiasts savor the spirit at its full strength or with a drop of water, yet he encourages imbibers to savor the spirit as they see fit.

“Ultimately, I hope that Raceking, like our other whiskies, invokes curiosity and sparks conversation about what whiskey is and what it can be,” said Kaveh.

Rabbit Hole Raceking Founder’s Collection will be available beginning in September at fine retail shops. Only 1,365 sequentially-numbered bottles will be released for a suggested retail price of $295 per bottle.

In keeping with the aesthetic of Rabbit Hole Founder’s Collection, the striking presentation of Raceking consists of a linen-patterned box featuring the brand’s rabbit marque in a chocolate-brown etching surrounded by metallic mocha appointments and sophisticated racing-silk-blue accents. The color palette tastefully extends to the bottle which features embossed-glass detailing of the brand’s iconic sash label and includes a metallic-topped cork engraved with Kaveh’s family crest of “Amare et Opus,” which speaks to his motto of loving what you do.

Released in 2020, Rabbit Hole Founder’s Collection is a platform under which Kaveh Zamanian develops special expressions that showcase his creativity and commitment to the artistry of whiskey making. These one-of-a-kind releases are limited edition, cask-strength and released bi-annually.