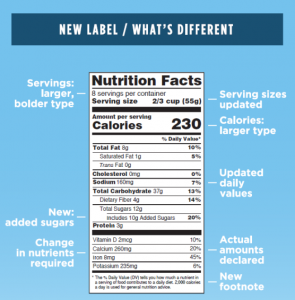 In new guidelines, the U.S. Department of Agriculture has, for the first time, set daily recommended limits on the amount of sugar consumers should ingest. This regulatory emphasis on sugar reduction has spurred the development of sugar alternatives to combat America’s growing diabetes and obesity crises.

Since 2008, Naples, FL.- based Pyure Brands has been educating consumers and retailers, as well as food and beverage companies, on Pyure’s plant-based stevia sweetener. It’s the first organic, non-GMO stevia on the market, and is the sugar reduction and sweetening solution for their products. Now a key sweetener ingredient in hundreds of food and beverage products and sold in thousands of retail outlets across the country, Pyure’s stevia reduces the amount of added sugars in these products by 30% -50% while providing great taste.

Simply by substituting Pyure stevia for sugar in morning beverages like coffee or tea, consumers can sharply reduce their sugar intake. An average American drinks three cups of coffee, each sweetened with two teaspoons of sugar. Switching to Pyure stevia, an average American coffee drinker can cut out 24 grams of sugar, almost half of the recommended daily allowance of 50 grams.

“Since 2008, we have been successful in convincing food and beverage makers and consumers nationwide that stevia is not only a healthier alternative to sugar but also the solution to a sugar epidemic,” explains Pyure Brands’ Founder and CEO, Benjamin Fleischer. “We have created a business built on improving health,” he added.

The marketplace has validated Pyure’s business model. The company received national distribution with Whole Foods Market in 2010 and Walmart in 2014. With a three-year growth rate of 348%, the company is now one of the largest suppliers of stevia in the country.

The new guidelines advise Americans to consume no more than 10% of calories from sugars, less than 50 grams a day, a direction that should limit the consumption of staples like candy, soda, and other heavily sweetened beverages like coffees and teas. Even many yogurt products, which are viewed as healthier, could fall outside of the 10% rule. The 2015-2020 Dietary Guidelines are released jointly by United States Department of Agriculture (USDA) and the US Department of Health and Human Services (HHS) and revised every five years.

While many view the government’s revised position on sugar as long overdue, big food and agricultural companies maneuvered behind the scenes in recent months to weigh in on the proposed change. Ultimately, the government decided it could no longer ignore a public health crisis. The recommendation to limit sugar intake comes at a time when nearly 10% of the U.S. population is diabetic and an additional 80 million Americans are classified as pre-diabetic. Over the past five years, a growing body of evidence has linked high levels of sugar consumption to an increased risk of Type 2 diabetes and heart disease, even among Americans who are not overweight or obese.

Beyond obesity and diabetes, sugar is now being linked to serious other diseases. According to a report this past week by Angelica Lai in mom.me, “researchers at the University of Texas MD Anderson Cancer Center focused on the mammary gland and linked high sugar intake to breast and lung cancers, joining a number of studies that tie sugar to obesity and heart disease worldwide. The[se] findings, published in Cancer Research, are particularly significant given that the average American consumes more than 100 pounds of sugar per year.” That’s nearly 2 pounds of sugar consumed each week and nearly one-third of a pound daily.

Stevia has become increasingly mainstream thanks in part to Coca-Cola and PepsiCo launching stevia-sweetened products. Amid declining sales of soda, the major beverage companies began banking on stevia as a panacea. Popularized in Japan in the 1970s, Americans began acquiring a taste for the sweetener in 2008 as anti-obesity campaigns gained steam and artificial sweeteners like aspartame fell out of favor over fears of possible links to cancer. Stevia contains virtually no calories. Around the same time, Pyure launched the first Organic, Non-GMO Stevia products offering a unique taste profile. That taste profile has literally become their calling card. “On our business cards and marketing materials, you’ll see ‘Trusted for Taste’,” Fleischer said. “We are the organic, alternative sweetener of choice in hundreds of food and beverage products. These companies and brands work really hard perfecting their formulations and optimizing taste. Bottom line, not all stevia tastes the same.”

The government’s announcement is a harbinger of good things to come for Pyure. “The new dietary guidelines are great from a business perspective,” Fleischer said. “More importantly, our products are a solution to a serious health problem. We know we are helping people.”

About Pyure Brands, LLC:Pyure Brands, LLC is a distributor and manufacturer of commercial and retail stevia products. Pyure Brands® provides the sweetening solutions for hundreds of food, beverage, and nutraceutical products. Their retail products can be found in fine retailers such as Walmart, Whole Foods Market, Wegmans, and HEB. The company is headquartered in Naples, FL. For more information, visit pyuresweet.com or contact Philip@PyureBrands.com.