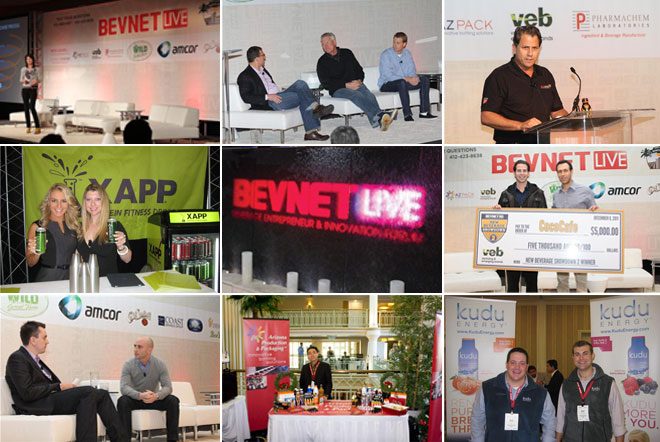 In case you missed it, here’s what we learned at BevNET Live’s Santa Monica event in December:

Monster Energy sees itself as a lifestyle company. Red Bull is a media empire. As for high-end CSD Izze, Co-founder Todd Woloson said that he saw it as something like an onion.

Those ideas about branding – and many other off-beat ideas that are necessary to distinguish beverage companies in highly competitive times – came alive during the BevNET Live Winter event that concluded on Tuesday in Santa Monica. The two-day conference, the sixth held by the beverage media company in the past three years, served as a capstone on a year filled with innovation and intrigue in the beverage world.

But it’s not the last time it’s going to happen. On June 4 and 5 of 2012, BevNET Live will return to New York, with a vastly larger space and high-tech focus at the Metropolitan Pavilion. (Early-Bird signups are now available at www.bevnet.com/live.)

In Santa Monica, a host of industry leaders and thinkers took to the stage to introduce the room-filling crowd of 460 to ideas about addressing the issues of new beverage product introduction, growth, distribution and investment. The event also featured the new Brewbound Craft Beer Forum, a similar event designed to address the needs of the craft beer community.

Former FUZE CEO Lance Collins explained one of the most important ways that he harnesses his ideas to create marketable products, introducing a “roll call” of brand-building partners, most important of which is his longtime creative “muse,” Paula Grant of Nyack, NY’s Flood Creative, as well as his sales and marketing “fraternity”: a group including longtime sales chief John Kenneally, who is just one of many team members currently living at Collins’ house in Los Angeles. The group is working on shepherding Collins’ newest product, a multi-function vitamin and mineral-enhanced beverage called Body Armor through its early growth phase.

Even with money and experience behind him, Collins said, he is fully cognizant of the long odds for runaway success in the beverage business, which can provide high returns for brand CEOs but typically involves long odds and hard work. Collins advised entrepreneurs to stay away from venture capital and private equity funds, and also explained his “hive” approach.

“Surround yourself with people smarter than you and you’ll go far,” he said.

Other highlights of the event included Red Bull marketing director Amy Taylor, who wowed attendees by giving glimpses of Red Bull’s focus on growing influential subcultures as a way of enhancing the brand’s ability to generate media that in turn brings credibility to the brand. By associating the energy drink with rising stars of those subcultures – and then not pushing, but instead capturing –their excitement in live events and on film, the brand has become a recognizable player both on television and on-line, with recognition that transcends the cooler and extends into sponsorship and, at best, works as a litmus test for legitimacy.

BevNET itself stirred the pot even more, offering its Best of 2011 awards, including an interview with Vita Coco founder Mike Kirban, who was selected as Person of the Year. Another coconut water, ZICO Chocolate, took the Product of the Year title, continuing a three-year run of dominance in the top awards for the burgeoning category.

BevNET Live’s first afternoon was devoted to smaller groups. Attendees had the opportunity to choose between nine 45-minute breakout sessions offering granular instruction on ingredients and packaging, marketing through science, charities, and celebrities, and  distribution and retailing advice, while in another private session a group of beverage company CEO’s were given the chance to discuss problems and issues in a new BevNET Live roundtable session. Networking continued for all with the BevNET Expo and subsequent cocktail hour.

Here’s a gallery of some of the exciting offerings on display at the Expo.

While Monday’s event might have been given over to awards chosen in the weeks leading up to BevNET Live, Tuesday’s session was marked by a day-long march to picking a winner in the New Beverage Showdown, a session sponsored by Coca-Cola’s Venturing & Emerging Brands group that saw six new brand owners square off in an attempt to win $5000 and the kind of “instant credibility” that public victory can confer.

The day also featured the traditional mix of entrepreneur presentations and panels taking place as well. To start the day, Clayton Christopher, the founder and former CEO of Sweet Leaf Tea joined with Catterton Partners’ Michael Farello and Nestle Waters North America CFO William Pearson to provide a three-headed presentation on the inception, growth through investment and eventual sale of Sweet Leaf to the larger strategic acquirer.

Another successful acquisition was touched on during a presentation by Todd Woloson, the co-founder and former CEO of Izze Beverage, which was purchased by PepsiCo at the end of 2007. The spunky company relied on what Woloson termed “discovery” as a way of winning consumers. He described a process by which the brand owners “thought of Izze as a real person… what would Izze do? Where would Izze go?”

While Monday had featured a drop-in from Person of the Year winner Kirban, Monster, the company that won Best Energy Drink for 2011 sent over two representatives, President Mark Hall and marketing chief Geoffrey Bremmer. The pair provided insight into the energy drink category – which Bremmer said still had a long way to go in terms of adding consumers, let alone increasing the number of use occasions for existing adopters – and also its competitive environment.

BevNET Live’s Tuesday afternoon session moved from inspirational brands to distribution and investment. The audience was introduced the audience to a rising young distribution company, Gourmet Purveyors International, as well as several ideas about attracting brand investment, including a panel on brand incubation and another on recent trends in capital availability and the switch to capital efficiency as a measure of a brand’s investment-worthiness instead of growth rate. After a presentation on Field Marketing and another exploring diverse – and somewhat unorthodox — retail channels, it was time to announce the winner of the showdown: Coco Café. The company’s owners, Eilan Eifer and Brian McCaslin, work locally – so locally, in fact, that they were preparing to walk down Ocean Avenue, just outside the hotel, with their oversized winner’s check.